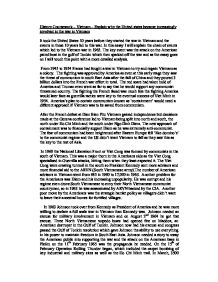 History Coursework - Vietnam - Explain why the United states became increasingly involved in the war in Vietnam It took the United States 10 years before they started the war in Vietnam and the events in these 10 years led to this war. In this essay I will explain the chain of events which led to the Vietnam war in 1965. The key event was the attack on the American patrol boat in the gulf of Tonkin which then sparked off the war and as the essay goes on I will touch this point with a more detailed analysis. From 1945 to 1954 France had fought a war in Vietnam to try and regain Vietnam as a colony. The fighting was approved by America as even at this early stage they saw the threat of communism in south East Asia after the fall of China and they poured 3 billion dollars into the French war effort in total. ...read more.

In 1960 the National Liberation Front or Viet Cong was formed by communists in the south of Vietnam. This was a major thorn in the Americans side as the Viet Cong specialised in Guerrilla attacks, hitting them when they least expected it. The Viet Cong were creating turmoil in the south so President Kennedy sent more advisors and more financial aid to the ARVN (South Vietnamese army).The number of American advisors in Vietnam went from 685 in 1960 to 17,000 in 1963. Another problem for the Americans was Diem and his increasing unpopularity. He was corrupt and his regime even drove South Vietnamese to envy their North Vietnamese communist countrymen, so in 1963 he was assassinated by ARVN backed by the CIA. Another poor move by the Americans was the strategic hamlet policy as villagers didn't want to leave their ancestral homes for fortified villages. ...read more.

In March, 3500 American marines arrived in South Vietnam and were the first official American troops. The war had become Americanised and General Westmoreland took charge of military operations. . By 1968 there were 500,000 American troops in Vietnam. In conclusion America wouldn't have been drawn into a conflict in Vietnam if it wasn't for the number of key factors that occurred in the late 1950's and late 1960's. The pivotal incident was the attack on the destroyed 'Maddox' in the gulf of Tonkin, which gave Johnson the opportunity to begin a conflict with Vietnam and perhaps if this hadn't of happened, the war wouldn't have happened. The spread of communism through 'the domino effect' in eastern Europe and the fall of China to communism was the reason the Americans showed interest in Vietnam in the first place. This was the motive behind Vietnam, and was the key factor behind the war. 645 ...read more.