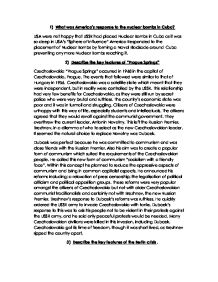 1) What was America's response to the nuclear bombs in Cuba? USA were not happy that USSR had placed Nuclear Bombs in Cuba as it was so deep in USA's "Sphere of Influence" America Responded to the placement of Nuclear Bombs by forming a Naval Blockade around Cuba preventing any more Nuclear Bombs reaching it. 2) Describe the key features of "Prague Springs" Czechoslovakia "Prague Springs" occurred in 1968 in the capital of Czechoslovakia, Prague. The events that followed were similar to that of Hungary in 1956. Czechoslovakia was a satellite state which meant that they were independent, but in reality were controlled by the USSR. This relationship had very few benefits for Czechoslovakia, as they were still run by secret police who were very brutal and ruthless. The country's economic state was poor and it was in turmoil and struggling. Citizens of Czechoslovakia were unhappy with this way of life, especially students and intellectuals. The citizens agreed that they would revolt against the communist government. They overthrew the current leader, Antonin Novotny. This left the Russian Premier, Brezhnev, in a dilemma of who to select as the new Czechoslovakian leader. It seemed the natural choice to replace Novotny was Dubcek. Dubcek was perfect because he was committed to communism and was close friends with the Russian Premier. Also his aim was to create a popular form of communism which suited the requirements of the Czechoslovakian people. He called this new form of communism "socialism with a friendly face". ...read more.

The issue was - how these great nations would react to such events. Early in the year of 1962, something happened which would scar the relationship between USA and USSR. This would come to be known as the "13 days Cuban Missile Crisis ". John F Kennedy (JFK) was the current president of USA and was informed that Khruschev, the USSR Premier was planning to place nuclear missiles on Cuba. This worried JFK due to the fact that Cuba was so deep in America's "Sphere of Influence" and posed a great threat to America. So JFK ordered a naval blockade around Cuba to prevent any more missiles reaching Cuba. JFK then addressed his naval blockade and called on Khruschev to recall his ships. Khruschev replied that he wouldn't and his ships would break through the blockade and they would launch nuclear weapons if America declared war on them. USA and USSR each put their military forces on highest alert and told them to prepare for war. JFK ordered American citizens to build themselves fallout shelters; these consisted of basic design which would not prove much projection to resist an atomic bomb. Khruschev agreed that he would remove nuclear missiles from Cuba if USA promised not to invade Cuba but Khruschev received intelligence that USA were planning a mass invasion of Cuba within the next twenty four hours. He proposed a new deal to the USA leader that they if USA redrew their weapons from Turkey that USSR would agree to remove their weapons from Cuba. ...read more.

Brezhnev's response to Dubcek's reforms was ruthless. He quickly ordered the USSR army to invade Czechoslovakia with tanks. Dubcek's response to this was to ask his people not to be violent in their protests against the USSR army, and he said only peaceful protests would be needed. Many Czechoslovakian civilians were killed in this invasion, including Dubcek. Czechoslovakia got its time of freedom, though it was short lived, as Brezhnev ripped the country apart. In 1969, Brezhnev introduced "The Brezhnev Doctrine" for all the satellite states. It stated that no-one within the Warsaw Pact could introduce such reforms as Dubcek had introduced in Czechoslovakia. International reactions to this series of events varied in Europe. Most of Western Europe was appalled and the French Communist Party declared that they had no partnership with USSR or Brezhnev in any way. USA, throughout the revolution, was supporting the Czechoslovakian people, though gave no military help to them. This was due to the fact they were held up in a bloody war, with high death tolls in Vietnam, against communism. Both USSR and USA seemed to have a mutual agreement that neither would interfere with each other's wars and this saw the end of the Czechoslovakian's "Prague Springs". To conclude about how the relations between the USSR and the USA changed during this period we can see that even though events such as the Cuban Missile Crisis and the Czechoslovakian Prague Springs were major events which didn't improve the relations between the two superpowers, Detente remained intact and mutual agreements were able to be maintained between the two nations. Therefore relations did not deteriorate as much as they might have. By Jacob Gentile ...read more.