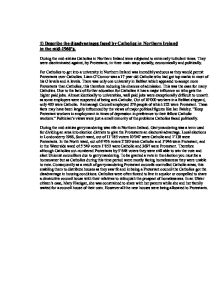 1) Describe the disadvantages faced by Catholics in Northern Ireland in the mid-1960's. During the mid-sixties Catholics in Northern Ireland were subjected to extremely turbulent times. They were discriminated against, by Protestants, in three main ways socially, economically and politically. For Catholics to get into a university in Northern Ireland was incredibly arduous as they would permit Protestants over Catholics. Liam O'Connor was a 17 year old Catholic who had got top marks in most of his O levels and A levels. There was only one university in Belfast which appeared to accept more Protestants than Catholics, this therefore reducing his chances of admission. This was the case for many Catholics. Due to the lack of further education for Catholics it has a major influence on who gets the higher paid jobs. Almost identically to universities, well paid jobs were exceptionally difficult to unearth as some employers were suspected of being anti-Catholic. Out of 10'000 workers in a Belfast shipyard, only 400 were Catholic. Fermanagh Council employed 370 people of which 322 were Protestant. These facts may have been largely influenced by the views of major political figures like Ian Paisley. ...read more.

"Keep Protestants and loyal workers in employment in times of depression in preference to their fellow Catholic workers." Like Brookeborough he described them as unfaithful and unwilling to work in times of need compared to Protestant workers who were competent and eager. Both of these statements show the Protestant politicians use of propaganda to criticize Catholics and give reason to the disadvantages they proposed. Protestants politicians had various political justifications to describe the differences between Catholics and Protestants. More Protestants than Catholics became boundary commissioners because Catholics refused to take these positions. They were offered but declined to because they felt that the odds were stacked against them. Therefore the government used this refusal as justification as to why the boundaries of the constituencies favoured Protestants. Politicians used propaganda to explain that if Catholics got into power then they would follow the strict guidelines of the Roman Catholic Church and in doing this many laws would have been changed due to Catholics 'backward views.' They would have banned divorce because Catholics believe that marriage is sacred in the eyes of god and that you should have one life long partner. Along with divorce, contraception and abortion would also have been prohibited because Catholics do not believe in preventing or destroying lives. ...read more.

The major trigger cause for the British Army entering Northern Ireland was the events and the predicted aftermath of the 'Battle of the Bogside.' The 'Apprentice Boys' go on a traditional march every August to commemorate the defence of Londonderry against King James's II forces. On 12 August 1969 the Apprentice Boys marched along a part of Londonderry that overlooked a Catholic Bogside. Bogsiders prevented entry of the Apprentice Boys by erecting barricades because of fears of a Loyalist attack. A minority of the Apprentice Boys threw pennies and rioting broke out between the two. Unclearly explained why, the RUC decided to take down the barricades. In reaction to this the Bogsiders began to petrol-b**b the RUC. This lasted for two days where 8 people died and 750 people were injured. Violence now erupted in other major cities. As Northern Ireland appeared on the verge of civil war British forces were sent into attempt to restore law and order, privately working along side the RUC to enable this. Upon review, sending in the British army was the best choice all round. They would contribute and suit all parties in four ways. They would bring law and order back to Northern Ireland in the process giving the RUC more help to do this, protect Catholics from any further violent attacks from Loyalists/RUC and finally containing the IRA, preventing terrorism. Ryan Gallagher ...read more.