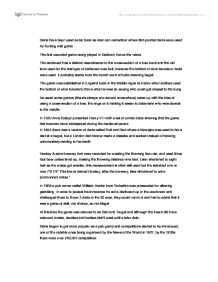 Darts have been used as far back as man can remember where flint-pointed darts were used for hunting wild game. The first recorded game being played in Dartford, hence the name. The dartboard has a distinct resemblance to the cross section of a tree trunk and the old term used for the first type of dartboard was butt, because the bottom of wine barrels or butts were used. It probably stems from the french word of butte meaning target. The game was established in England back in the Middle Ages at a time when soldiers used the bottom of wine barrels to throw short arrows at, seeing who could get closest to the bung. As usual some genius (there's always one around somewhere) ...read more.

In 1908 a pub owner called William Anakin from Yorkshire was prosecuted for allowing gambling. In order to protest his innocence he set a dartboard up in the courtroom and challenged them to throw 3 darts in the 20 area, they could not do it and had to admit that it was a game of skill, not chance, so not illegal. At this time the game was referred to as Dart and Target and although the board did have coloured circles, doubles and trebles didn't exist until a later date. Darts began to get more popular as a pub game and competitions started to be introduced, one of the notable ones being organised by the News of the World in 1927, by the 1930s there were over 200,000 competitors. In 1954 the National Darts Association was formed and championships began. ...read more.

The Halex electronic board can mark your throw line with a laser, bit different from the old beer crate. Brian Gamlin is the man who devised the modern day numbering system, he was a carpenter from Lancashire in England and he invented this frustrating number system in 1896 but he died in 1903 before he could patent the idea. It is designed to stop lucky shots and reduce the element of chance and punish inaccuracy, meaning that if you are aiming for a score of 20 the numbers either side of this are 1 and 5 so if you are not accurate you will be punished with a low number. Did you also know that the nickname for the left hand side of the board is Married Man's side' because they always play safe and of course the bigger numbers are on the left side? ...read more.