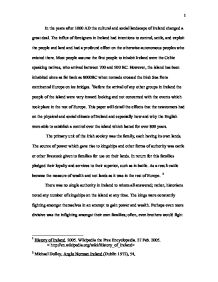 In the years after 1000 AD the cultural and social landscape of Ireland changed a great deal. The influx of foreigners in Ireland had intentions to control, settle, and exploit the people and land and had a profound effect on the otherwise autonomous peoples who existed there. Most people assume the first people to inhabit Ireland were the Celtic speaking natives, who arrived between 700 and 500 BC. However, the island has been inhabited since as far back as 8000BC when nomads crossed the Irish Sea from continental Europe on ice bridges. 1Before the arrival of any other groups in Ireland the people of the island were very inward looking and not concerned with the events which took place in the rest of Europe. This paper will detail the effects that the newcomers had on the physical and social climate of Ireland and especially how and why the English were able to establish a control over the island which lasted for over 800 years. The primary unit of the Irish society was the family, each having its own lands. The source of power which gave rise to kingships and other forms of authority was cattle or other livestock given to families for use on their lands. In return for this families pledged their loyalty and services to their superior, such as in battle. As a result cattle became the measure of wealth and not lands as it was in the rest of Europe. 2 There was no single authority in Ireland to whom all answered; rather, historians noted any number of kingships on the island at any time. The kings were constantly fighting amongst themselves in an attempt to gain power and wealth. Perhaps even more divisive was the infighting amongst their own families; often, even brothers would fight each other dividing the established hierarchy. 3 This created increased divisions between competing clans on the island and made any attempt to rule over it seemingly impossible as no Irishman was able to accomplish it. ...read more.

Using monies loaned to him by his wealthy friends and giving promises of lands and titles to those who helped him he was able to muster a small force. He was also able to assure promises of more men in the coming years from someone who would become a predominant figure in the years to come, Richard fitz Gilbert also called Strongbow. This man was eager to help because he was out of favor with Henry as he did not support him in the English Civil War. To Strongbow Dermot promised his daughter in marriage, making him the heir to whatever territories they gained. Using his new allies, Dermot returned in 1167 and reinstated himself in his old capital where for the next two years he waged small scale wars against his old enemies. As his enemies were still pre-occupied fighting each other he was able to regain most of his former lands and to live in peace as he awaited his next wave.14 Having been the first Irishman to look to England for help in Ireland he was branded "Dermot of the foreigners" and is still considered the greatest traitor in Irish history as his invitation marked the beginning of the end of Irish sovereignty in the minds of many Irish.15 It is tragic that the Irish peoples continued to fight against one another even after knowing that Dermot had aligned himself with the most powerful King Europe. Should they have worked together to throw off the English the course of Irish history would have undoubtedly been different. They would have saved themselves from the centuries of horror and catastrophic neglect which were to follow. As promised, Dermot's new allies arrived in Ireland in 1170 numbering nearly 2000 men. These newcomers held a tremendous advantage over the natives in the form of their advanced weapons. They possessed archers which proved to be an essential part of their success in the conquests that followed. ...read more.