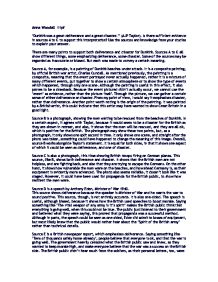 Anna Woodall 11pf 'Dunkirk was a great deliverance and a great disaster.'' (AJP Taylor). Is there sufficient evidence in sources A to G to support this interpretation? Use the sources and knowledge from your studies to explain your answer. There are many points to support both deliverance and disaster for Dunkirk. Sources A to G all show different things, some emphasizing deliverance, some disaster. Some of the sources may be regarded as inaccurate or biased. But each was made to convey a certain meaning. Source A, for example, is a painting of Dunkirk beaches under attack. It is a composite painting, by official British war artist, Charles Cundall. As mentioned previously, the painting is a composite, meaning that the event portrayed never actually happened, rather it is a mixture of many different events, put together to show a certain atmosphere or to show the type of events which happened, through only one scene. Although the painting is useful in this effect, it also proves to be a drawback. Because the event pictured didn't actually occur, we cannot use the 'event' as evidence, rather than the picture itself. ...read more.

Source C is also a photograph, this time showing British troops firing on German planes. This source, like B, shows both deliverance and disaster. It shows that the British men are not helpless, and are fighting back, and also that they are trying to escape the Germans. On the other hand, it shows how vulnerable the men were on the beaches, and how ahead Germany is, as their equipment is evidently more advanced. The photo also seems reliable, it doesn't look like it was staged. However, it could have been used for propaganda for the British public, to show how resilient the men were. Source D is a speech by Anthony Eden, Minister of War 1940. This source shows deliverance because the speaker is Minister of War and he wants the war to sound positive. This source, though, is not entirely accurate. It is also one-sided. The speech is useful, although biased, because it shows how the British used speeches to boost morale. Saying something like 'The vital weapon of any army is it's spirit' makes the British public think that everything is going well, when this could not be true. ...read more.

It fits with deliverance and disaster. Taylor describes how it was a deliverance; 'It succeeded beyond expectation. However, he also said 'BEF lost virtually all it's guns'. This is quite accurate because it mainly states facts, rather than gives opinions. The source is a balanced account, showing points for both deliverance and disaster. The writer was a historian, and would have studied lots of stories and accounts, and most likely arrived at a fair conclusion. Finally, source G. This source is a video about the Dunkirk evacuation, from Film Century. It shows both British and German points of view. It showed the Spirit of Dunkirk, 'Channel Incident', which was a film made just after the war. The German point of view showed Dunkirk to be a disaster, whereas the British made it out to be a deliverance. The film 'Channel Incident' was heavily censored, like other British media of the time, as the British wanted to show the Dunkirk Spirit, with the phrase 'Never say die'. After studying each of these sources, I have come to the conclusion, that I agree with AJP Taylor's statement. Each source makes points, many from different origins, about Dunkirk being both a deliverance and a disaster. I believe it was both. ...read more.