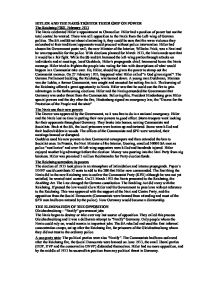 Hitler and the Nazis - how the Nazis gained power and how they used it.

HITLER AND THE NAZIS TIGHTER THEIR GRIP ON POWER The Reichstag FIRE, February 1933 The Nazis celebrated Hitler�s appointment as Chancellor. Hitler had a position of power but not the total control he wanted. There was still opposition to the Nazis from the Left-wing of German politics. The SA and SS set about eliminating it; they could be sure that the wave violence they unleashed at their traditional opponents would proceed without police intervention. Hitler had chosen his Government posts well; the new Minister of the Interior, Wilhelm Frick, was a n**i and he was responsible for the police. With elections planned for March 1933, the Nazis made sure that it would be a fair fight. While the SS and SA harassed the left-wing parties through attacks on individuals and at meetings, Josef Goebbels, Hitler�s propaganda chief, hammered home the Nazis message. Hitler tried to frighten the people into voting for him with descriptions of what would happen in a Communist take over. He, Hitler, should be given the power to stamp out the Communist menace. On 27 February 1933, happened what Hitler called "a God given signal"- The German Parliament building, the Reichstag, was burned down. A young man Dutchman, Marinus van der Lubbe, a former Communist, was caught and executed for setting fire to it. The burning of the Reichstag offered a great opportunity to Nazis. Hitler saw that he could use the fire to gain advantages in the forthcoming elections. Hitler and the Nazis persuaded the Government that Germany was under threat from the Communists. Believing this, President Hindenburg gave Hitler special powers and the day after the fire, Hindenburg signed an emergency law, the "Decree for the Protection of the People and the state" The Nazis use their new powers The Decree was approved by the Government, as it was free to do in a national emergency. ...read more.

Hitler believed it reached the German people directly. The Nazis did a factory to build cheap radios and made sure that these only had a limited range that would pick up n**i information only. Loudspeakers were put up in restaurants, offices, factories, cafes and even in the streets!. The Nazis found very difficult to control German newspapers as there were many so they used the n**i Party's own publishing company, Eher Verlag, to gain ownership of the newspapers and Socialists and Communists papers were destroyed. On October 1933 the Nazis passed the "Editors Law" which reduced the power of the newspaper owners and gave the editors responsibility for what went in the newspaper. Nazis made the news: Nazis created new public celebrations such as rallies, marches and rituals. The Nazis encouraged Germans to use the Hail Hitler greeting, the n**i salute, and wear military style uniforms and popularized a n**i song. People were punished for not having the n**i flag on their homes. n**i CULTURAL LIFE Every cultural activity such as art, theatre and music had to show n**i ideas. The Propaganda Ministry supervised the Reich Chamber of Culture. Its job was to make sure that all cultural activities helped mould the mind of Germans to n**i believes. Performances with music composed by Jews, were banned. German music had to be patriotic, military and popular. Only plays written by traditional playwrights like Shakespeare could be performed because they were acceptable to the Nazis. n**i Germany was no place for talented writers. Goebbels organized the raiding of libraries and seizure of books of writers who were not approved. Art could not be modern not abstract. Cinema was the only area less restricted as Goebbels considered that if it was too controlled, Germans would be put off but however, all the scripts were checked by the Ministry. ...read more.

The law made it virtually impossible to avoid joining Hitler Youth organizations. However, 25 March 1939, the Second Youth Hitler Law was passed and it made membership of the Hitler Youth and the "duty of youth service" to Germany, compulsory. Members of the Hitler Youth had to swear an oath loyalty to the Fuhrer. Spying on teachers and parents: The Young people were a valuable way of checking up on society. They kept watch on their parents and made sure they were behaving and speaking in a war the Nazis would approve of and teachers were also checked. THE NAZIS AND EDUCATION The Nazis changed education that young people received in schools. The used the schools to produce good young Nazis. The Nazis and the teachers: The teachers were persuaded by a mixture of propaganda and threat into joining the National Socialist Teachers League. By 1937, the 97% of the teaching profession had joined. Teachers had to be given a reference that they were good Nazis. They turned to the Nazis in the hope that their pay, status and conditions would be improved (they had been particularly hit by the cuts in wakes introduced during the economic crisis of 1929-1933). But they were soon disappointed as Hitler and the leading Nazis speeches showed that they had little respect for teachers and their payments were not improved. n**i changes to what is taught: The Nazis took control of the school. They picked out the subjects which would help them to get n**i ideas across to young people. Those with physical handicaps were refused a secondary education. German language and literature work was carefully chosen and biology was to teach children about Nazis ideas on race. History was given great importance. The timetable of children was very strict; they went to school on Saturdays, all the days they had Sports, domestic science, race studies and German. ...read more.