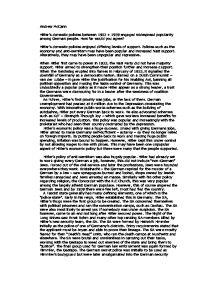 Hitler's domestic policies between 1933 + 1939 engaged widespread popularity among German people. How far would you agree?

Andrew McCann Hitler's domestic policies between 1933 + 1939 engaged widespread popularity among German people. How far would you agree? Hitler's domestic policies enjoyed differing levels of support. Policies such as the economy and anti-semitism may have been popular and increased Nazi support. Alteratively, they may have been unpopular and repressive. When Hitler first came to power in 1933, the Nazi Party did not have majority support. Hitler aimed to strengthen their position further and increase support. When The Reichstag erupted into flames in February of 1933, it signalled the downfall of Germany as a democratic nation. Blamed on a Dutch Communist - van der Lubbe - it gave Hitler the justification for his Enabling Act, banning all political opposition and making the Nazis control of Germany. This was undoubtedly a popular policy as it made Hitler appear as a strong leader, a trait the Germans were clamouring for in a leader after the weekness of coalition Governments. As Fuhrer, Hitler's first priority was jobs, or the lack of them. German unemployment had peaked at 6 million due to the Depression devastating the economy. ...read more.

The SA were also most likely to arrest you if somebody was under suspicion. The SA however, came to an end not long after Hitler secured power. The Night of the Long Knives saw Ernst Rohm and many other top ranking SA members killed by Hitler's new security team, the SA. The SA were formed by Heinrich Himmler initially as the police of one of Germany's districts. Entry requirements stated that the applicant must be Aryan and able to prove their lineage. The SA were mostly feared for their "Death's Head" units, who ran the death camps at Auschwitz and elsewhere. The SA were brutal and unrelentless in carrying out their tasks, working with the Gestapo to weed out enemies of the state and bring them to "justice". The final group used for German law enforcement was again formed by Himmler, the Gestapo. The German secret police was initially to be used as Himmler's bodyguard but were later amalgamated into the German security forces. The Gestapo were not as straightforward as the SA or SS, often tracking suspects for extended periods of time and eventually arresting them, where torturous methods would be used to extract information and used against them, where they would generally be turned over to the SS. ...read more.

These schemes offered increased opportunities for children to meet with others and participate in physical activities for the boys or learning domestic skills for the girls. In the Hitler Youth however, the activities had a clearly militaristic aim. Boys were being trained as soldiers for Hitlers war to create Lebensraum for the people. Education was also touched by the Nazis. Teachers had to be a part of the Nazi Union or forced out of work. Subjects such as Mathematics were changed to suit the coming Nazi war machine, with children calculating the velocity of bombs and other information that would prove useful. Hitler's anti-semitic propaganda was also a part of educations with Jews being ridiculed by their classmates and eventually forced out of the state schools system. Youth and education was yet another popular policy made by Hitler. The children were enthused by their respective organisations and the new curriculum. In conclusion, it could be said that Hitler's policies enjoyed widespread support such as his foreign policy and economic policy. However, due to a few key decisions that proved unpopular with masses such as the use of fear and terror against the population. From this, I would partially agree with the statement that Hitler's domestic policies between 1933 + 1939 engaged widespread popularity among German people. ...read more.