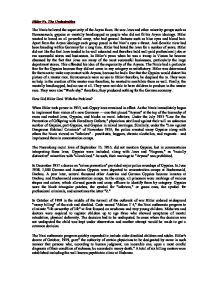 Hitler Vs. The Undesirables.

Hitler Vs. The Undesirables The Nazis believed the superiority of the Aryan Race. He saw Jews and other minority groups such as Homosexuals, gypsies or mentally handicapped as people who did not fit his Aryan ideology. Hitler wanted to breed an all powerful army, who had general features such as blue eyes and blond hair. Apart from the Aryan ideology each group posed in the n**i's eyes a threat. Anti-Semitic view had been breeding within Germany for a long time. Hitler had hated the Jews for a number of years. Hitler did not like the fact Jews tended to be well educated and therefore held well-paid professional jobs or ran successful stores and businesses. In Hitler's years when he was a tramp in Vienna he became obsessed by the fact that Jews ran many of the most successful businesses, particularly the large department stores. ...read more.

How Did Hitler Deal With the Problem? When Hitler took power in 1933, anti-Gypsy laws remained in effect. As the Nazis immediately began to implement their vision of a new Germany - one that placed "Aryans" at the top of the hierarchy of races and ranked Jews, Gypsies, and blacks as racial inferiors. Under the July 1933 "Law for the Prevention of Offspring with Hereditary Defects," physicians sterilized against their will an unknown number of Gypsies, part-Gypsies, and Gypsies in mixed marriages. Similarly, under the "Law against Dangerous Habitual Criminals" of November 1933, the police arrested many Gypsies along with others the Nazis viewed as "inferiors" - prostitutes, beggars, chronic alcoholics, and vagrants - and imprisoned them in concentration camps. ...read more.

Code named "Aktion T 4," the n**i euthanasia program to eliminate "life unworthy of life" at first focused on newborns and very young children. Midwives and doctors were required to register children up to age three who showed symptoms of mental retardation, physical deformity. The decision had to be undisputed. In cases where the decision was not undisputed the child was kept under observation and another attempt would be made to get a common decision. The n**i euthanasia program quickly expanded to include older disabled children and adults. Hitler's decree of October, 1939, gave" the authority of certain physicians to be designated by name in such manner that persons who, according to human judgment, are incurable can, upon a most careful diagnosis of their condition of sickness, be accorded a mercy death." A total of six killing centers were established including the well known psychiatric clinic at Hadamar. ...read more.