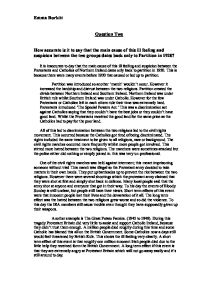 How accurate is it to say that the main cause of this ill feeling and suspicion between the two groups dates back only to Partition in 1920?

this was very un-professional. One of the civil rights marches was held against interment; this meant imprisoning someone without trial. This march was illegal so the Protestant army decided to take matters in their own hands. They put up barricades up to prevent the riot between the two religions. However there were several shootings which the protestant army claimed that they were shot at first and simply shot back in defence. Many local people said that the army shot at anyone and everyone that got in their way. To his day the events of b****y Sunday is still unclear, but people still have their views. Short term effects of this event were that innocent people lost their lives and the devastation of it all. ...read more.

Emma Burkitt The Easter Rising (1916) is another example. This was when two Pearse and Connolly marched to the general post office, invaded and captured it for their head quarters. This march was arranged to gain independence in Ireland. The short term effect of this march was that the rebels were arrested and brutally murdered. The long term effect was that they demanded home rule. It is very hard to say why all the trouble, hatred and suspicion and ill feeling between the two religions have resulted due to b****y Sunday because many event before and after partition has added to the hatred. Without such events like, The Easter Rising and The Great Potato Famine, then partition would have never been thought up. Life in Ireland could be so much different today between the two religions. ...read more.