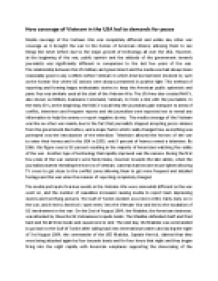 ﻿How coverage of Vietnam in the USA led to demands for peace Media coverage of the Vietnam War was completely different and unlike any other war coverage as it brought the war to the homes of American citizens; allowing them to see things like never before due to the major growth of technology all over the USA. However, at the beginning of the war, public opinion and the attitude of the government towards journalists was significantly different in comparison to the last few years of the war. The relationship between the US military and government and the media was had always been reasonably good in any conflicts before Vietnam in which America had been involved in; such as the Korean War where US actions were always presented in positive light. This method of reporting and forming happy enthusiastic stories to keep the American public optimistic and panic free was similarly used at the start of the Vietnam War. The US Army also created MACV, also known as Military Assistance Command, Vietnam, to form a link with the journalists. In the early 60?s, at the beginning, the MACV would help the journalists gain transport to areas of conflict, interviews and frequent reports and the journalists were expected not to reveal any information to help the enemy or report negative stories. The media coverage of the Vietnam was like no other war mainly due to the fact that journalists stopped accepting press releases from the government like before, and a major factor which really changed how everything was portrayed was the introduction of the television. Television allowed the horrors of the war to enter their homes and in the USA in 1950, only 9 percent of homes owned a television. By 1966, this figure rose to 93 percent resulting in the majority of Americans watching the reality of the war. Another type of technology that rapidly improved was the camera. ...read more.

A lot of people were doing it and I just followed. I lost all sense of direction." The televised media coverage of the Mai Lai Massacre was the most damaging to the reputation of the US soldiers and it especially had such a big impact on public opinion as the first reports claimed that 128 Vietcong were killed and only 22 civilians. General William C. Westmoreland, the Military Assistance Command, Vietnam commander, congratulated the unit on the "outstanding job" and the media towards the beginning just went along with what they were told. However, when the real figures of the deaths were released the media instantly reported on them and as they were so different to the previous figures, much of the public felt lied and cheated on. The media reported the horrific truth on Mai Lai and reported what they found and saw with their own eyes rather than what they were told. The evacuation of Saigon took place in 1975, and was the event that marked the end of the Vietnam War as North Vietnamese troops attacked the city of Saigon, which had been fairly difficult to reach before as it was so far down South, however once the US troops had started to withdraw the remains of the South Vietnamese army were unable to withstand the strength of the North Vietnamese. Millions of refugees had fled to Saigon after their homes had been taken over as the North Vietnamese proceeded to take over the whole country. One of the biggest difficulties that occurred during the fall of Saigon was the evacuation of the US Embassy on the 29th of April where approximately 7,000 Americans and South Vietnamese were evacuated via helicopter and eventually the next day North Vietnamese Army tanks drove into Saigon unopposed and the city was then known as Ho Chi Minh City from then on. This was all shown by the media and the images of people desperately hanging on to one helicopter destroyed any hope that the Americans ever had for the war and it gave the impression that the war did more harm than good. ...read more.

This is a extract of what Kerry stated in his testimony about the Winter Soldier Investigation which took place previously in Detroit, "...I would like to talk, representing all those veterans, and say that several months ago in Detroit, we had an investigation at which over 150 honorably discharged and many very highly decorated veterans testified to war crimes committed in Southeast Asia, not isolated incidents but crimes committed on a day-to-day basis with the full awareness of officers at all levels of command. "It is impossible to describe to you exactly what did happen in Detroit, the emotions in the room, the feelings of the men who were reliving their experiences in Vietnam, but they did. They relived the absolute horror of what this country, in a sense, made them do."They told the stories at times they had personally raped, cut off ears, cut off heads, tape wires from portable telephones to human genitals and turned up the power, cut off limbs, blown up bodies, randomly shot at civilians, razed villages in fashion reminiscent of Genghis Khan, shot cattle and dogs for fun, poisoned food stocks, and generally ravaged the country side of South Vietnam in addition to the normal ravage of war, and the normal and very particular ravaging which is done by the applied bombing power of this country." John Kerry then later went on to describe his thoughts on the whole political situation in Vietnam and how he felt that there was no global threat of communism to the USA and that it was more a civil war between the Vietnamese. In conclusion, I think that the media had the biggest impact on the Vietnam War as it was probably the biggest factor that led to America?s defeat ? not militarily on the battlefield, but socially and politically. The US troops failed to win the hearts and minds of the Vietnamese civilians, as well as failing to win the hearts and minds of their own people. http://www.gcsehistory.org.uk/modernworld/vietnam/index.htm http://news.bbc.co.uk/1/shared/spl/hi/asia_pac/05/vietnam_war/html/turning_point.stm http://www.historylearningsite.co. http://voices.yahoo.com/how-media-coverage-vietnam-war-changed-america-667863.htmluk/gulf_tonkin_1964.htm http://www.warbirdforum.com/media.htm ...read more.