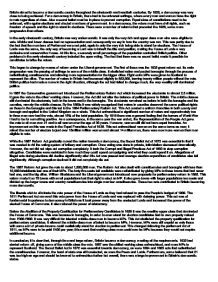 How democratic had Britain become by 1928.

How democratic had Britain become by 1928. Britain aimed to become a democratic country throughout the nineteenth and twentieth centuries. By 1928, a democracy was very close to being achieved. For a democracy in Britain, there had to be universal suffrage, where every man and women have the right to vote regardless of class. Also a secret ballot must be in place to prevent corruption. Equal sizes of constitutions need to be enforced, with regular elections and elected members of government. In a democracy, the voters must have civil rights, such as freedom of speech and the right to stand in elections. There were a number of reforms that preceded the 1928, some more progressive than others. In the early nineteenth century, Britain was very undemocratic. It was only the very rich and upper class men who were eligible to vote. Middle and lower classes had no representation and consequently no say in how the country was run. This was partly due to the fact that the members of Parliament were not paid, again in only the very rich being able to stand for elections. ...read more.

This Act created a uniform franchise in both county and borough and applied to the United Kingdom as a whole. This Act enfranchised a significant number of voters and approximately two in three men now had the vote, almost 18% of the total population. By 1918 there was a general feeling that the horrors of World War I had to be for something positive. As a consequence, in the same year the war ended, the Representation of the People Act gave the vote to all men over 21 and to all women over the age of 30 years. However, women still did not have equal franchise. An improvement on this was made in the Equal Franchise Act of 1928. This act enfranchised women on the same terms as men; it raised the number of electors to just over 15million million women and almost 14 million men, there were now more women than men eligible to vote. While the 1867 Reform Act gradually moved the nation towards a democracy, the Secret Ballot Act of 1872 was essential in that it was needed to rid the voting system of bribery and corruption. ...read more.

This was because in boroughs, in order to even stand for election candidates had to own property valued from �300-�600. It was very difficult for talented middle-class men to become MPs. This Act abolished the property qualification for parliamentary candidates. It allowed the middle-class men of talent to become MPs. However, MPs were still unpaid so only those with some sort of private income could realistically stand for election to parliament. This changed following the parliament Act of 1911, as MPs were to be paid �400 per year; this meant that working class men could now be MPs because they would not require additional income. In conclusion, it is clear that, through time and large reform, Britain became a democracy, meeting all the requirements. 1832 had started reform off, giving some of the middle class the vote. 1867 saw the skilled working class enfranchised, and more MPs to represent Scotland. The Secret Ballot Act in 1872 was essential towards democracy, as were 1884 and 1885 acts that redistributed the constituencies. However, the head of state was still unelected, as were the Peers and Lords. Furthermore, some believed that 21 was too high an age and should be lowered to enfranchise further but overall, there was a large improvement in Britain's democratic status. ...read more.