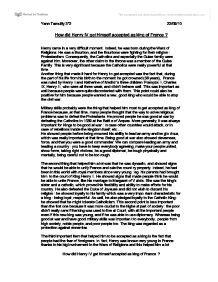 How did Henry IV get himself accepted as king of France ?

How did Henry IV get himself accepted as king of France ? Henry came in a very difficult moment. Indeed, he was born during the Wars of Religions. He was a Bourbon, and the Bourbons were fighting for their religion : Protestantism. Consequently, the Catholics and especially the Guise family were against him. Moreover, the other claim to the throne was a member of the Guise Family. This is very significant because the Catholics were really powerful at that time. Another thing that made it hard for Henry to get accepted was the fact that, during the part of his life from his birth to the moment he got crowned (36 years), France was ruled by Henry II and Katherine of Medici 's three children: Fran�ois II, Charles IX, Henry III, who were all three weak, and didn't behave well. This was important as well because people were quite discontented with them. This point could also be positive for him because people wanted a new, good king who would be able to stop the civil war. Military skills probably were the thing that helped him most to get accepted as king of France because, at that time, many people thought that the way to solve religious problems was to defeat the Protestants. ...read more.

Whereas being good at war and have good military skills was important to everybody, people from high society, noble people, and poor people too. The king was regarded as a protection against ennemies. The third important item that helped him to be accepted as a king is the fact that people had the fear of foreigners. In fact, Henry was known very young in France thanks to his big involvement in the Wars of Religions and this helped him a lot because everybody knew who he was and how able he was (physically and mentally). This can seem a bit childish but it is really important for people to know who the future king is and how he is, and if he is going to be a good king. This is important because we know people were really afraid of foreigners : for example when the Catholics got help from Spain, many Catholics hated the sight of Spanish soldiers in Paris. Moreover, the King of Spain suggested that his daughter should become Queen of France but the people of Paris refused because she wasn't French, which shows French people's fear of foreigners : they only wanted French Kings and Queens. However, I put this point third because the fear of Foreigners is a secondary point. ...read more.

And just before, in April 1598, he signed the Edict of Nantes, which gave more tolerance towards the Protestants. These examples show that he was able to lead an army and that he was quite a good diplomat too. He was as well strategic. He was able to make some choices that were good for the country but not for him eg he married a Catholic. He used the kingdom's money quite well after peace was established. All these items show that he had quite a lot of qualities and personal skills. I think the most important reasons for Henry's success is his ability to rule the country. In more details, this ability is based on various items detailed in the previous paragraphs: : he was directive, knew how to react against various things like rebellion : this shows cleverness. He was not a tyrant but showed strength. All this can explain his success : No one else would have been able to establish peace and prosperity in France at that time, after this terrible period of war. The country was devastated and he almost started from nothing. However he also did bad things like bribing people to help him and changing religion quite often. ?? ?? ?? ?? Yann Tarouilly 3�2 22/09/10 How did Henry IV get himself accepted as king of France ? ...read more.