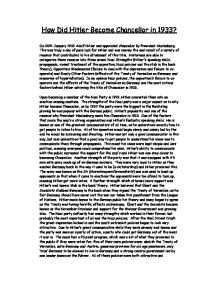 How Did Hitler Become Chancellor in 1933

How Did Hitler Become Chancellor in 1933? On 30th January 1933 Adolf Hitler was appointed chancellor by President Hindenburg. This was truly a day of pure luck for Hitler and was merely the end result of a variety of reasons that contributed to his attainment of this title. Historians are able to categorise these reasons into three areas; Nazi Strengths (Hitler's speaking skills, propaganda, violent treatment of the opposition, Nazi policies and the stab in the back theory), Opposition Weaknesses (failure to deal with the depression and failure to co-operate) and finally Other Factors (effects of the Treaty of Versailles on Germany and memories of hyperinflation). In my opinion Nazi policies, the opposition's failure to co-operate and the effects of the Treaty of Versailles on Germany are the most critical factors behind Hitler achieving the title of Chancellor in 1933. Upon becoming a member of the Nazi Party in 1919, Hitler converted them into an election-winning machine. The strengths of the Nazi party was a major aspect as to why Hitler became Chancellor, as by 1932 the party were the biggest in the Reichstag proving he was popular with the German public. Hitler's popularity was one of the reasons why President Hindenburg made him Chancellor in 1933. One of the factors that made the nazi's a strong organisation was Hitler's fantastic speaking skills. He is known as one of the greatest communicators of all time, as he understood exactly how to get people to listen to him. ...read more.

could have been prevented if the parties were able to co-operate. After WW1 the Weimar Constitution was to become one of the most advanced democracies in Europe and so a system of proportional representation was introduced in order to allow even small parties to gain seats in the Reichstag. Therefore everyone's preferred political party often got to represent them. This would have been a clever system, except this meant there were lots of different parties with very different views in the Reichstag. The phrase 'two many cooks spoil the broth' is highly appropriate here. The fact that all the parties had very different policies meant that making a decision was highly difficult and when a problem needed a quick solution this was near enough impossible. This fact caused a chain reaction, as it meant the Weimar government failed to deal with the depression because they could not make a decision quick enough. The Weimar Government was made to look incapable of making important decisions concerning its country and it's people. Support and faith in the government flitted away and Hitler's extreme policies were becoming more and more attractive. Hitler may have never become so popular and in the situation to become Chancellor if the parties could have co-operated and dealt with the depression successfully. The final area which historians divide the grounds as to why and how Hitler became Chancellor is that of other factors. ...read more.

Franz von Papen. The army disliked him however and so he appointed a more right-wing politician Von Schleicher, but he did not have much support in the Reichstag so he was forced to resign after just 8 weeks. Hindenburg realised he needed a Chancellor whom was popular and so Hitler appeared his only option. However he still did not trust Hitler, but thought that he could use Franz von Papen to tell Hitler how to run the country (make Hitler a puppet). Therefore on the 30th January Hitler was invited into power due to Hindenburg's underestimation of his character. In conclusion, many elements contributed to Adolf Hitler becoming Chancellor in 1933, the most important being Nazi policies, the oppositions failure to co-operate and the effects of the Treaty of Versailles on Germany. All of the factors increased support for him and made him a popular politician, which enabled him to be in the position to be invited into power in 1933. The day of 30th January was simply pure luck for Hitler and is not important in understanding why he came into power, as if it would not have been then it would have been soon after. Hindenburg's underestimation of Hitler was basically the spark that allowed Hitler to come to power, much like the assassination of Arch Duke Franz Ferdinand was the spark that engineered the 1st World War. If it would not have been these actions it would have been another. Overall Hitler's intelligence and the weaknesses of the opposition allowed him to become Chancellor in 1933. ?? ?? ?? ?? ...read more.