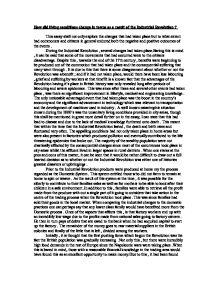 How did living conditions change in towns as a result of the Industrial Revolution ?

How did living conditions change in towns as a result of the Industrial Revolution ? This essay shall not only explore the changes that had taken place but to what extent had commoners and citizens in general endured both the negative and positive outcomes of the events . During the Industrial Revolution , several changes had taken place.Baring this is mind , it can be said that some of the movements that had occurred were to the citizens disadvantage. Despite this , towards the end of the 17th century , benefits were beginning to be produced out of the commotion that had taken place and the consequential suffering that many went through . It is due to this that there is some disagreement about whether or not the Revolution was a benefit ; and if it had not taken place, would there have been less labouring , grief and suffering by workers at that time?It is a known fact that the advantages of the Revolution having it's place in British history was only revealed long after periods of labouring and severe epidemics . This was since after these and several other events had taken place , was there an significant improvement in lifestyle, medical and engineering knowledge . The only noticeable advantaged event that had taken place was the boost in the country's economy and the significant advancement in technology which was relevant to transportation and the development of machines used in industry . A well known catastrophic situation known during the 1800's was the unsanitary living conditions provided in city areas, though this shall be mentioned in great more detail further on in the essay, I can state that this had lead to disease and due to the lack of medical knowledge furthered onto death . This meant that within the time that the Industrial Revolution lasted , the death and birth rates and fluctuated very often. ...read more.

In some instances , there may even be a family living in the cellar . These conditions had often aided disease to spread between family members and had prevented a sufficient amount of ventilation accessing the rooms. Some houses had lacked heating during the colder months which lead to those vulnerable with weak lungs to contract breathing related viruses , such as bronchitis. People had also found children playing in the shared lavatories . It is certain to say that not all workers had lived in these terraced houses but those who had lived in cottages often had their homes to be cold and damp . Cholera was the great killer during the 17th century. It had originated from abroad and had made it's first appearance on British territory in Sunderland . It was later passed through to other areas via the filthy water .There were several other epidemics which mostly occurred during 1854, 1848, 1838 and the earliest was 1832 . The outbreaks had killed the majority of London alone during 1849 , when seven thousand had died .Aside from cholera , other infectious diseases were spread by the air and the terrible pollution that the factories produced. Typhoid, tuberculosis and lice were amongst the main outbreaks . The death rates were rather high since hardly anyone had sufficient medical knowledge or cure to such diseases that occurred .Poor hygiene and unsanitary conditions did not help put the epidemics to a halt since they were persisting in the same disposal methods prior to the outbreaks . The outcomes were that due to the lack of knowledge , several had been left to die . Though , I can question , had putting the epidemics to a halt been more of a job for the doctor than the engineer ? I do question this , since it is the poor sanitary disposal and the open sewers that had caused the disease to spread in the first place . ...read more.

The unventilated and cramped conditions had aided the spread of disease , whilst the open sewers , shared lavatory and animals in the street as well as refuse and rubbish were the main causes of the epidemics .The main epidemics being among cholera from the water which had killed many and even tuberculosis had broken out .Pollution from the factories had spread air-born diseases. Having thought , in-depth about this , I can draw a conclusion to say that having not the wealthy and risk takers been in such as rush to build up on new ideas , they may have considered the effects that it would have on their workers.It can even be said that perhaps they were ignorant of what the future would hold if they had taken the actions that they did .Though, if they had done what I had thought of , the development of Britain may have been much slower and in the long run , if the physicians had discovered that they were under pressure for cures , they may have not really sat down and concentrated on finding cures since they may have believed that it would be possible for these diseases to break out . Though , as the government had noticed the problems and gave commoners the right to vote , I believe that it was then when the country was gradually beginning to improve . Since have not the campaigns taken place , no views would have been heard and the change to a fuller democracy would have been slowed down . Though , it was when the workers unions had got together that the Public Health Acts and the Artisans Dwellings Acts had taken place. Now , to come to end this matter , I can formally state that the Industrial Revolution had a drastic effect on the living conditions , though if these negative aspects had not taken place , development in medicine , technology and even engineering would have been delayed since it was after , campaigns once again , had engineers reconstructed the open sewers underground . ...read more.