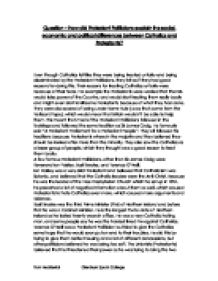 How did Protestant Politicians explain the social, economic and political differences between Catholics and Protestants?

Question - How did Protestant Politicians explain the social, economic and political differences between Catholics and Protestants? Even though Catholics felt like they were being treated unfairly and being discriminated by the Protestant Politicians, they felt as if they had good reasons for doing this. Their reasons for treating Catholics unfairly were because of their fears. For example the Protestants were worried that the IRA would take power of the Country, and would start treating them really badly and might even start to kill some Protestants because of what they had done. They were also scared of being under Rome Rule (Laws that came from the Vatican/Pope), which would mean that Britain wouldn't be able to help them. This meant that most of the Protestant Politicians followed in the footsteps and followed the same tradition as Sir James Craig. He famously said "A Protestant Parliament for a Protestant People". They all followed his traditions because Protestants where in the majority and they believed they should be looked after more than the minority. They also saw the Catholics as a lesser group of people, which they thought was a good reason to treat them badly. A few famous Protestant Politicians, other than Sir James Craig were Reverend Ian Paisley, Basil Brooke, and Terence O'Neill. ...read more.

There had always been a long history of violence between Catholics and Protestants, as they kept fighting with each other over land, and power. These two different loyalties also resulted in discrimination which caused a new organisation to be formed, the IRB (Irish Republican Brotherhood), which was later renamed the IRA (Irish Republican Army). The Protestant Politicians in Northern Ireland feared the IRA. This was because they wanted to be separate from Britain so that they could live as a United Ireland. They feared they would take over by using terrorism, and that maybe they would kill the Politicians to make a point. This affected the way Protestants saw Catholics. This then led to the Catholics being stereotyped because the Protestants believed they were all dangerous as the IRA was made up of Catholics. Mistrust also grew between the two religious groups as they couldn't trust each other to even walk on the opposite side of the street just in case they did something. This caused the Protestant Politicians to bring in Internment which meant that the Police Force could throw anybody in Prison they believed was part of the IRA without an investigation or a court case. ...read more.

But Ian Paisley tried to do the opposite. He preached that NICRA was the front of the IRA, so if you gave up to NICRA then you were giving up to the IRA. So the rest of the Protestant Politicians didn't want any changes to Catholic's rights because they believed that if they all get their own right to vote then they would be voted out of power and the Roman Catholic Church would take over. So if the Roman Catholic Church gained control, then the Protestant Politicians believed that they would refer back to the Old Catholic Laws, which included no contraception or divorce, and that they might be severely punished for what the Pope would call Sins. They might also have feared that they might be exiled and would all have to leave Northern Ireland and start a new life elsewhere, even if they had no money. So the Protestant Politicians believed that they had good reasons for discriminating against them and that the difference in the treatment was unavoidable. So because they saw themselves as superior they believed that it would be too dangerous to allow the Catholics back into power, because to much of the Catholic (Nationalist/Republican) influence would be bad for the country, as they believed it would harm the country in every way, Socially, Economically and Politically. ?? ?? ?? ?? Tom Hedderick Glenburn Sports College ...read more.