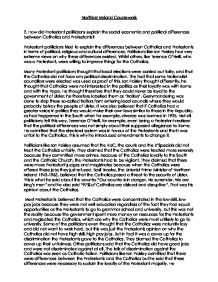 How did Protestant politicians explain the social economic and political differences between Catholics and Protestants?

Northern Ireland Coursework 2. How did Protestant politicians explain the social economic and political differences between Catholics and Protestants? Protestant politicians tried to explain the differences between Catholics and Protestants in terms of political, religious and cultural differences. Politicians like Ian Paisley had very extreme views on why these differences existed. Whilst others, like Terence O'Neill, who was a Protestant, were willing to improve things for the Catholics. Many Protestant politicians thought that local elections were carried out fairly, and that the Catholics did not face any political discrimination. The fact that some Nationalist councillors were elected was used as proof of this. Ian Paisley thought differently, he thought that Catholics were not interested in the politics as their loyalty was with Rome and with the Pope. He thought therefore that they could never be loyal to the government of Ulster; he therefore labelled them as 'traitors'. Gerrymandering was done to stop these so-called traitors form entering local councils where they would probably betray the people of Ulster. It was also believed that if Catholics had a greater voice in politics they would make their own laws similar to those in the Republic, as had happened in the South when for example, divorce was banned in 1925. ...read more.