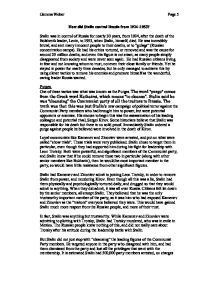 How did Stalin control Russia from 1924-1953? Stalin was in control of Russia for nearly 30 years, from 1924, after the death of the Bolshevik leader, Lenin, to 1953, when Stalin, himself, died. He was incredibly brutal, and sent many innocent people to their deaths, or to "gulags" (Russian concentration camps). He had his critics tortured, or removed and was the cause for around 20 million deaths, and even this figure is not exact, as many people simply disappeared from society and were never seen again. He had Russian citizens living in fear and not knowing whom to trust, not even their close family or friends. Yet he stayed in power for nearly three decades, but he only managed to achieve this by using clever tactics to remove his enemies and promote himself as the wonderful, caring leader Russia wanted. Purges. One of these tactics was what was known as the Purges. The word "purge" comes from the Greek word Kathairei, which means "to cleanse". Stalin said he was "cleansing" the Communist party of all the traitors to Russia. The truth was that this was just Stalin's new campaign of political terror against the Communist Party members who had brought him to power, but were potential opponents or enemies. His excuse to begin this was the assassination of his leading colleague and potential rival, Sergei Kirov. Some historians believe that Stalin was responsible for his death but there is no solid proof. Immediately Stalin ordered a purge against people he believed were involved in the death of Kirov. Loyal communists like Kamenev and Zinoviev were arrested, and put on what were called "show trials". These trials were very publicised. Stalin chose to target them in particular, even though they had supported him during his fight for leadership with Leon Trotsky. Both were powerful, and significant members of the Communist party, and Stalin knew that if he could remove those two in particular (along with other senior members like Bukharin), then he would be most important member in the party, so would have little resistance from other significant figures. ...read more.

This meant that young children would learn history the way Stalin wanted them to, and therefore would look up to him as a great leader. He also defied himself. Many buildings would have his face plastered on the walls. This showed that his influence was everywhere, and that there was no escape from his power. His face would look down on the workers, like the way a God would. Many statues were built of him, and placed all around Russia. Some showed him in normal workers clothes to reinforce that he was a "dictator of the people". Books were written about how much he has done for Russia, and films were made about his dedication to his country, and what an inspiration he was. All these factors brainwashed citizens of Russia into believing that Stalin was all that his propaganda made him out to be - a father figure, an inspiration, a significant part of Russian history, and most of all a great leader. As these images would be everywhere, it would be hard to get away from them, and their influence. Combine this with the purges stopping people criticising Stalin, and soon many Russian's believed all the hype. They thought Stalin deserved to control Russia, as he was going to make it great. Economic Policies. The Russian public was not the only people who believed that Russia was to become great under Stalin's rule. Stalin himself believed it too. He thought that Russia needed modernising, and this was his biggest priority. Stalin's main aim was to build up the army to defend Russia. Russia had been invaded fifty times in 100 years, whereas smaller countries like Britain had only been invaded once. This was because of the strength of the British army and navy. Stalin wanted Russia to have that kind of strength too, so set about building a powerful army. This was the purpose of his economic policies. ...read more.

He in turn was arrested and executed, after Stalin called the end to the purges, in 1938. The show trials during the purges were also run by the Secret Police. As they were both widely publicised and everyone was scared of the Secret Police, and the show trials. Anyone suspected criticising Stalin were removed from society, by the Secret Police, either to be executed or sent to gulags. Conclusion. In my final conclusion, Stalin was able to control Russia for so long because all four of these factors were in place. Without one of them, he would have probably lost his leadership much earlier. The Secret Police helped with the propaganda, economic policies, and the purges. If Stalin had not had them, then he would not have been able to carry out the harsh penalties and punishments he had for people who spoke against him, or did not meet his targets set for them. The purges were a horrific, but clever way to remove his enemies and rivals, and promote himself as a better, trustworthier leader. By removing all his senior Communist party members he made people believe that he was the natural leader of Russia, as he was one of the very few who were not "traitors to the state". Propaganda was essential to hide Stalin's brutality. If he had not had it in place, people would have seen right through his false exterior, and into his cold-blooded tactics to make him remain powerful. It also helped brainwash people into thinking he was something much better than he really was, like the senior Communist members being put on show trials did. The economic policies were a risky strategy. If they had failed, then there would have been chaos in Russia. Stalin knew that Russia needed defending, so he set up the Five Year Plans and Collectivisation to do this, but his targets were immensely high. Propaganda again played a part in this, as posters would remind citizens that they were building a better and safer Russia. This was how Stalin managed to control Russia for nearly three decades. Gemma Weber Page 5 ...read more.