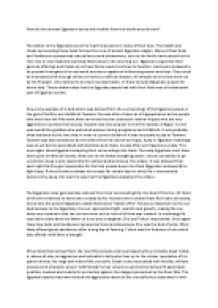 How did the ancient Egyptians derive their beliefs from the world around them?

Transfer-Encoding: chunked ﻿How did the ancient Egyptians derive their beliefs from the world around them? The deities to the Egyptians were the main focal points in many of their lives. The beliefs and rituals surrounding these Gods formed the core of ancient Egyptian religion. Many of their Gods and Goddesses represented natural forces and phenomena, such as the fertile land caused by the river nile or even baboons warming themselves in the morning sun. Egyptians supported their gods via offerings and rituals as so these forces would continue to function. Gods were believed to be present throughout the real world and were capable of influencing events and lives. They could be interacted with through shrines in homes or official temples. All temples at this time were run by the Pharaoh, who claimed to be Gods representative. In these temples Egyptians prayed for divine help. These relationships that the Egyptian people had with their Gods was a fundamental part of Egyptian society. One prime example of a God whom was derived from the surroundings of the Egyptian people is the god of fertility and childbirth Tawaret. ...read more.

The Egyptians main god was also derived from their surroundings Ra, the God of the Sun. All forms of life were believed to have been created by Ra. Humans were created from Ra's tears and sweat, hence why the ancient Egyptians called themselves "Cattle of Ra". Ra was so important as the sun God because to the Egyptians, the sun represented light, warmth and growth, making the sun deity very important also the sun was seen as the ruler of all that was created. In mythology Ra was said to have been the father to a son and a daughter, Shu and Tefnut respectively. Once again these two Gods and Goddesses represented natural phenomena. Shu was the God of wind, Wind likely offered great satisfaction after a long day of farming. Tefnut was the Goddess of rain which also offered relief after a drought. Other Gods that derived from the river Nile include a God portrayed with a crocodile head. Sobek is, above all else, an aggressive and animalistic deity who lives up to the vicious reputation of his patron animal, the large and violent Nile crocodile. ...read more.

She was also the deification of legal justice. It is believed that Cats were first domesticated 10,000 years ago. But the main Goddess that was based upon a domesticated cat was in the time of the second dynasty from 2890 BC. Bastet was the Goddess of warfare in lower Egypt, whilst upper Egypt had a similar lion warrior Goddess named Sekhmet. During the twenty second Dynasty, she changed from a warrior Goddess to a major protector deity. In conclusion, the ancient Egyptians where a very creative race in the way they derived their deities from the world around them. Everything that they could not explain, for example the Sun and Moon, they created a story around them as so it would make sense to them. The would also glorify something if it had good attributes such as the aggressive mothering power of a Hippo, or the ability to kill a dangerous snake from a cat. Overall the Egyptians used the deities that they created to make themselves more comfortable in the world around then. As so they could explain what could not be explain without the technology of the modern day. ...read more.