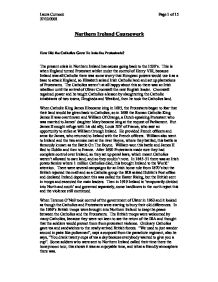 How Did the Catholics Grow To hate the Protestants?

Northern Ireland Coursework How Did the Catholics Grow To hate the Protestants? The present crisis in Northern Ireland has causes going back to the 1530's. This is when England turned Protestant whilst under the control of Henry VIII, because Ireland was all Catholic there was some worry that European powers would use it as a base to attack England, so Elizabeth seized Irish Catholic land and set up plantations of Protestants. The Catholics weren't at all happy about this so there was an Irish rebellion until the arrival of Oliver Cromwell the new English leader. Cromwell regained power and he taught Catholics a lesson by slaughtering the Catholic inhabitants of two towns, Drogheda and Wexford, then he took the Catholics land. When Catholic King James II became king in 1685, the Protestants began to fear that their land would be given back to Catholics, so in 1688 the Roman Catholic King James II was overthrown and William Of Orange, a Dutch-speaking Protestant who was married to James' daughter Mary became king at the request of Parliament. But James II sought refuge with his old ally, Louis XIV of France, who saw an opportunity to strike at William through Ireland. He provided French officers and arms for James, who returned to Ireland with the French officers. William also went to Ireland and the two armies met at the river Boyne, where they battled, this battle is famously known as the Battle On The Boyne. William won this battle and James II fled to Dublin and then to France. After 1690 Protestants made sure they had complete control over Ireland, so they set up penal laws, which meant Catholics weren't allowed to own land, and so they couldn't vote. In 1845-51 there was an Irish potato famine where 1 million Catholics died, this brought Ireland to the World' attention. There were several campaigns for an Irish home rule from 1870's but the British rejected them all and so a Catholic group the IRB seized Dublin's ...read more.

and in 1989 someone who was supposedly a member of the Guildford four named as Paul Hill was released from prison after 15 years because his conviction as over turned by the Court of Appeal. Mr Hill received �200,000 as an interim compensation payment and was apologized to by Tony Blair. There were two similar cases to this one where people who were meant to be members of the Birmingham Six and Eikenhof Three where put in prison even though they weren't guilty and in the Eikenhof Three's case confessions were tortured out of them and they were sentenced to death. The IRA was involved with the event known as b****y Sunday, where Parachute Regiment soldiers killed 14 peaceful marchers. The march was organised by the Civil Rights Movement, and was meant to be peaceful even though the ban on marches was being defied. This event led to even more violence from the IRA because the Parachute Regiment shot innocent people who were only standing up for what they believe in, also b****y Sunday caused outrage outside the UK and more funds were raised by America. Overall b****y Sunday was a poor attempt by the Parachute Regiment soldiers to try and stop the Catholics, also b****y Sunday gave the IRA more support because everyone thought the soldiers had no reason to shoot innocent people. The IRA was also involved in the Hunger strikers of 1981. Where ten prisoners - seven of them members of the IRA - starved them selves to death in protest of the abolishment of the 'Special Category'. This gained the IRA even more support from America and outside the UK, and this support showed at Bobby Sands' funeral when 100,000 people (about 20% of the Catholic population of Northern Ireland) attended the MP for Fermanagh funeral. Although the campaign to try and get the British out of Ireland continued, the IRA knew it could never force the British Government out of Northern Ireland at gunpoint while the British Government knew it could never defeat the IRA. ...read more.

But the IRA is still in the peace process, they have disarmed and in return the British destroyed an observation tower, which was built to observe Northern Ireland. But there still is the problem of the 'Real IRA' who Gerry Adams has called on to abandon their armed struggle and begin decommissioning, but the 'Real IRA' have refused. Overall I think that most political groups are accepting the peace process, and are doing all they can to make it work, for example John Hume of the SDLP was awarded the Nobel Peace Prize for all his efforts in talking to other group and persuading them to join the Peace Process. Another important figure in the Peace Process is Gerry Adams, who has had several talks with the IRA in the past and persuaded them to decommission their weapons. The IRA have been a major part of the conflict in Northern Ireland, they have stood up for what they believe in and tried to get it using violent methods. I think the IRA are wise in decommissioning their arms because it stops violence of at least one group, even though the Real IRA are still very active. Also they know they can't get the British out of Ireland with violence so they have entered talks and called a ceasefire. But there is still the problem of the Real IRA who believe that the cause of a united Ireland and British withdrawal can only be brought about through violence argue that decommissioning is the ultimate act of betrayal of traditional republicanism. I think that the Real IRA are very unreasonable because they haven't produced any political alternative to the peace process, apart from the thesis that armed resistance will some how one day succeed, plus there's a possibility that the North - South council of ministers could lead to a United Ireland, so they are very irrational because if they did decommission their weapons they could get what they want in the end. Laura Curnock Page 1 of 15 27/12/2001 ...read more.