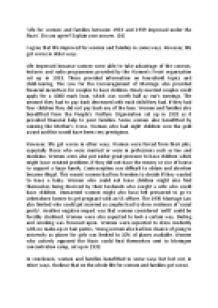 How did the lives of women and families improve in Nazi Germany?

﻿?Life for women and families between 1933 and 1939 improved under the Nazis?. Do you agree? Explain your answer. (16) I agree that life improved for women and families in some ways. However, life got worse in other ways. Life improved because women were able to take advantage of the courses, lectures and radio programmes provided by the Women's Front organisation set up in 1933. These provided information on household topics and child-rearing. The Law for the Encouragement of Marriage also provided financial incentives for couples to have children. ...read more.

Some women also benefitted by winning the Mother's Cross. Women who had eight children won the gold award and this would have been very prestigious. However, life got worse in other ways. Women were forced from their jobs, especially those who were married or were in professions such as law and medicine. Women were also put under great pressure to have children which might have created problems if they did not have the money or size of house to support a large family. ...read more.

Another negative impact was that women considered `unfit' could be forcibly sterilised. Women were also expected to look a certain way. Dieting and smoking was frowned upon. Women were expected to dress modestly with no make-up or hair perms. Young women also had less chance of going to university as places for girls was limited to 10% of places available. Women who actively opposed the Nazis could find themselves sent to Moringen concentration camp, set up in 1933. In conclusion, women and families benefitted in some ways but lost out, in other ways. I believe that on the whole life for women and families got worse. ...read more.