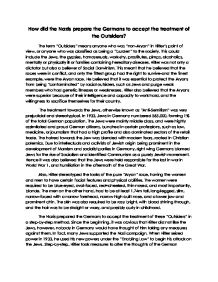 How did the Nazis prepare the Germans to accept the treatment of the Outsiders? The term "Outsiders" means anyone who was "non-Aryan" in Hitler's point of view, or anyone who was classified as being a "burden" to the society. This could include the Jews, the gypsies, homosexuals, work-shy, prostitutes, pimps, alcoholics, mentally or physically ill or families containing hereditary diseases. Hitler was not only a dictator but also a believer of Social Darwinism. This meant that he believed that the races were in conflict, and only the fittest group had the right to survive-and the finest example, were the Aryan race. He believed that it was essential to protect the Aryans from being "contaminated" by racial outsiders, such as Jews and purge weak members who had genetic illnesses or weaknesses. Hitler also believed that the Aryans were superior because of their intelligence and capacity to work hard, and the willingness to sacrifice themselves for their country. The treatment towards the Jews, otherwise known as "Anti-Semitism" was very prejudicial and stereotypical. In 1933, Jews in Germany numbered 565,000, forming 1% of the total German population. The Jews were mainly middle class, and were highly assimilated and proud German citizens, bunched in certain professions, such as law, medicine, or journalism that had a high profile and also dominated sectors of the retail trade. ...read more.

This marked the starting of the anti-Jewish campaigns. The Law for the Restoration of the Professional Civil service was passed on the 7th of April 1933, which forbid Jewish doctors and dentists to work for public health schemes, and dismissed Jewish teachers and barred Jewish lawyers from state employment. Through propaganda, Hitler convinced the population to believe the evil intentions of the Jews, as well as the difficulties that Germany was facing due to the breeding of homosexuals, work-shy, mentally or physically ill people. To prevent any opposition among the community, Hitler also organized public burning of books by Jews, Communists, Socialists and 'degenerate' authors who exemplified modern art and literature. During the month of July in 1933, the Sterilization Law was passed, which allowed Nazis to sterilize people with certain illnesses such as 'simple-mindedness' and 'chronic alcoholism'. This was then followed shortly after by rounding up of tramps and beggars, which were then sterilized. The Knight of the Long Knives occurred on the 29th of June, 1934, which gave Hitler the excuse to order a central register of all men known to engage in homosexual activities. Jews were later forbidden from any action within the army. On the 15th of September 1935, the Nuremberg Laws were passed, which stripped the rights of the Jews and reduced them to subjects with limited civil rights and banned marriages between "Aryans" and "non-Aryans" (Jews, Gypsies, Roma, and African people). ...read more.

In January 1939, the German government also ordered that Jews were to use the first names "Sara" or "Israel", Sara for females and Israel for males. This made identification much easier. January 1942 marked the start of the "Final Solution". To persecute the Jews, the Nazi also had to use certain tactic. This was through deception, where Jews were told that they were going to 'resettlement areas', which were in actual fact, death camps. The death camps were ruled by fear, and the Jews suffered daily, starved, and forced to work. In propagandas, the Jews were depicted as evil sub-humans, and by sending the Jews to the death camps, they became dirty, naked and half starved, which made them look like animals, reinforcing the Nazi propaganda. The people sent into the death camps were categorized. The women, children, the old and sick were sent for 'special treatment' while the young and fit would go through a process called 'destruction through work'. Jews were to be rounded up and put into transit camps called Ghettoes, and were used as a cheap source of labor. The conditions in the Ghettos were so bad that many died. All throughout the Nazi rule, the Nazi also focused on educating the children into believing that the actions they were taking was correct. The Nazi introduced "Eugenics class" into schools, which was the "Science" of breeding better humans, in other words, where anti Jewish teachings were conducted. In conclusion, the Nazis prepared the Germans in a step-by-step method. ...read more.