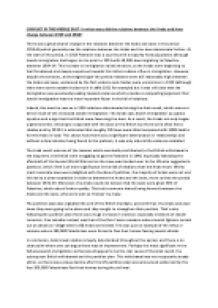 How did the relations between the Arabs and the Jews change between 1919 and 1948?

often fierce clashes and by 1939 it is estimated that roughly 130 Jews were killed compared with 5000 deaths for the Arabs in total. This shows how there was a significant deterioration in relationships and without a clear solution being found to the problem, it was only natural the violence escalated. The Arab revolt was one of the reasons which eventually contributed to the British withdrawal in the long term, the British were struggling to govern Palestine in 1948, especially following the aftermath of the Second World War and so the issue was handed over to the UN who suggested a partition, which I feel is of more significance in the fall of relations than the Arab revolt. ...read more.

One notable incident was that of the Deir Yassin massacre where Jewish fighters carried out an attack on village where 250 Arabs were killed. This was just on example of the influx in violence where 300,000 Palestinians were forced to flee their homes fearing Jewish attacks. In conclusion, Arab Israeli relations clearly deteriorated throughout the period, and there is no clear point where one can argue there was an improvement. Perhaps the most significant in the fall was Jewish immigration as that would appear to be the root cause of the Arab revolt, the subsequent British withdrawal and the partition plan. This withdrawal was not necessarily steady either, as there was a steep decline after the UN partition plan was announced evidenced by the fact 300,000 Palestinians fled their homes during the civil war. ...read more.