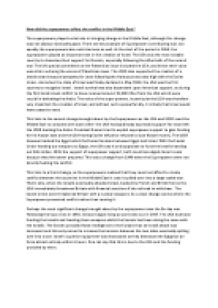 How did the Super Powers affect the conflict in the Middle East?

Transfer-Encoding: chunked ﻿How did the superpowers affect the conflict in the Middle East? The superpowers played a vital role in bringing change in the Middle East, although this change was not always necessarily good. There are key example of Superpowers contributing war, but equally the superpowers also restricted war as well. At the start of the period in 1948: the superpowers played an important role in the creation of Israel. The USA was the most notable country to showcase their support for Zionism, especially following the aftermath of the second war. The UN special committee on the Palestinian issue included the USA, and hence their voice was vital in echoing the voices of Palestinian Jews. ...read more.

This links to the second change brought about by the Superpowers as the USA and USSR used the Middle East to compete with each other- the USA having already expressed support for Israel left the USSR backing the Arabs. President Nasser tried to exploit superpower support to gain funding for his Aswan dam and the USA fearing Soviet influence refused to loan Nasser money. The USSR however backed the Egypt which furthered tensions between Egypt and Israel. With the Soviet Union handing out weapons to Egypt, the USA saw it only approiate to fund the Israelis handing out $65 million. With the support of superpower support, both countries edged closer to war because they felt better prepared. ...read more.

The Soviet Union even threatened Britain with a nuclear weapons. So a clear change can be where the Superpower prevented conflict rather than causing it. Perhaps the most significant change brought about by the superpowers was the Six day war. Following the Suez crisis in 1956, tension began rising as war broke out in 1967. The USA had been funding the Israelis and handing them weapons whilst the Soviets had been doing the same with the Israelis. The Soviets provided false intelligence to the Syrians that an Israeli attack was immanent and this only served to increase the tensions between the two sides eventually spilling over into a war. Israel?s superior equipment was showcased as they destroyed the Egyptian air force almost entirely within 6 hours. One can say that this is due to the USA and the funding provided by them. ...read more.