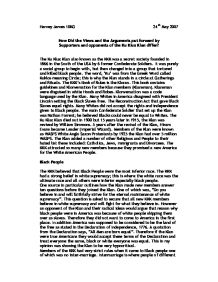 How Did the Views and the Arguments put forward by Supporters and opponents of the Ku Klux Klan differ?

Harvey James 10KG 24th May 2007 How Did the Views and the Arguments put forward by Supporters and opponents of the Ku Klux Klan differ? The Ku Klux Klan also known as the KKK was a secret society founded in 1866 in the South of the USA by 6 former Confederate Soldiers. It was purely a social group to begin with, but then changed into a group that tortured and killed black people. The word, 'Ku' was from the Greek Word called Kuklos meaning Circle; this is why the Klan stands in a circle at Gatherings and Rituals. The KKK's Book of Rules is the Kloran. This book contains guidelines and Klonversation for the Klan members (Klansman). Klansman were disguised in white Hoods and Robes. Klonversation was a code language used by the Klan. Many Whites in America disagreed with President Lincoln setting the Black Slaves free. The Reconstruction Act that gave Black Slaves equal rights. Many Whites did not accept the rights and independence given to Black people. The main Confederate Soldier that set up the Klan was Nathan Forrest; he believed Blacks could never be equal to Whites. The Ku Klux Klan died out in 1900 but 15 years later in 1915, the Klan was revived by William Simmons. 5 years after the revival of the Klan, Hiram Evans became Leader (Imperial Wizard). Members of the Klan were known as WASPS White Anglo Saxon Protestants by 1925 the Klan had over 5 million WASPS. The Klan added a number of other Religious and People to their hated list these included: Catholics, Jews, Immigrants and Divorcees. ...read more.

However an opponent of the KKK would strongly argue that America is a democracy and you are allowed to have your own opinion and ideas. This means no one can stop you from saying these things. The Bill of Rights clearly states, 'Freedom of Religion, speech, press and assembly.' This means they can express their ideas on communism. But also when many immigrants came to America, most wanted to escape Communism than influence it to a new country where they are starting a new life. So most immigrants only came to America to get away from Communism not to start it. Finally, a supporter of the Klan believed that immigrants were inferior to White Anglo Saxons, they were looked down upon as not as pure as the True Americans who were there from the founding of America. They also felt that they had a lower standard of living this included, education, they were poor and could not always afford education and could therefore not contribute to the country. Hite Anglo Saxons liked to call themselves, Old Stock or Pioneer Stock; these were considered to be superior. Hiram Evans said that, "The Pioneer stock must be kept pure", and he is implying that White Anglo Saxons must be kept pure and no one can ruin their superior race. The mixing of two different cultures would ruin this. This meant the Klan made sure no immigrant managed to have a relationship with the superior race. Immigrants would argue that immigrants are coming from countries with terrible poverty and famine. This is there reason for making the effort to come to America. ...read more.

Also the Klan always claimed to be very charitable towards people and liked to look after America and have always been seen as good people who help the community. But on the other hand an opponent of the Klan would say that this was very hypocritical as yet again Stephenson had been bribing Politicians in Indiana for the support of the Klan, these people were very crooked and were only in it for the money; this is what the Klan claimed they were fighting against. Also the Klan would always break the law, for example Jose Yglesias described a strike in 1931, "During the strike the KKK would come into the Labour Temple with guns and break up the meetings." This shows the Klan as very violent and wanting to stop anyway of solving this by breaking up meetings, and they put fear in people by using weapons which also could mean people joined the Klan out of fear. In conclusion, the Ku Klux Klan in my opinion was very hypocritical and prejudice towards others. An example of this hypocrisy is the use of alcohol. The Klan claimed it was home-wrecker but still D. Stephenson drank alcohol and made others around him drink it. This I believe shows the Klan to have underlying problems within the Klan. Also, the prejudice attitudes towards immigrants, the members of the Klan themselves are not native to the America. They were very hypocritical in this situation. Overall, arguments put forward by both supporter and argument differed. The Klan claimed they were right and were the right thing to belong to whereas the opponents (in my opinion) brought out the truth of the Klan's underlying problems and hypocrisy. ...read more.