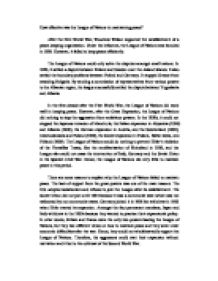 After the First World War, Woodrow Wilson supported the establishment of a peace-keeping organization. Under his influence, the League of Nations was founded in 1920. However, it failed to keep peace efficiently.

The League of Nations could only solve the disputes amongst small nations. In 1920, it settled a dispute between Finland and Sweden over the Aaland Islands. It also settled the boundary problems between Poland and Germany. It stopped Greece from attacking Bulgaria. By sending a commission of representatives from various powers to the Albanian region, the league successfully settled the dispute between Yugoslavia and Albania.

There are some reasons to explain why the League of Nations failed to maintain peace. The lack of support from the great powers was one of the main reasons. The U.S. adopted isolationism and refused to join the League after its establishment. The Soviet Union did not join until 1934 because it was a communist state which was not welcomed by non-communist states. Germany joined it in 1926 but withdrew in 1933 when Hitler started its expansion. Amongst the four permanent members, Japan and Italy withdrew in the 1930s because they wanted to practice their expansionist policy. In other words, Britain and France were the only two powers leading the League of Nations, but they had different views on how to maintain peace and they were under economic difficulties after the war. Hence, they could not wholeheartedly support the League of Nations. Therefore, the aggressors could start their expansion without restriction and it led to the outbreak of the Second World War.

In addition, there are some weaknesses on the internal system of the League of Nations. For example, a unanimous agreement of every issue had to be made before taking any action. However, the members of the League were not wholehearted in maintaining peace. They strived for their own interests in the League and hence made a unanimous agreement impossible. The League also had no military force and economic resources to implement the decision made. It could only condemn the aggressive actions of ambitious powers or imposed economic sanction. For example, when Italy invaded Abyssinia in 1935, France continued the trading relations with Italy even though it was a leading member in the organization. Finally, the League could do nothing to the withdrawal of members. The League of Nations had no real power to maintain collective peace. Most of the nations used their own way to settle their disputes.

In conclusion, as the first international organization to maintain collective peace, the League of Nations made the first step to achieve the goal of building up an international organ to solve problems among countries. However, the lack of real authority and the lack of support from powerful nations undermined its effectiveness in maintaining peace.