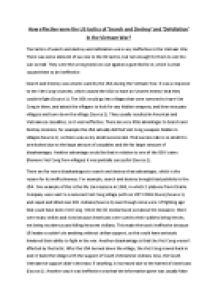 How effective were the US tactics of 'Search and Destroy' and 'Defoliation' in the Vietnam War?

﻿How effective were the US tactics of 'Search and Destroy' and 'Defoliation' in the Vietnam War? The tactics of search and destroy and defoliation were very ineffective in the Vietnam War. There was some element of success to the US tactics, but not enough for them to win the war overall. They were the wrong tactics to use against a guerrilla force, which is what caused them to be ineffective. Search and Destroy was a tactic used by the USA during the Vietnam War. It was a response to the Viet Cong's tunnels, which caused the USA to have an 'Unseen enemy' that they couldn't fight (Source 1). The USA would go into villages that were rumored to have Viet Cong in them, and attack the villagers to look for any hidden weapons, and then evacuate villagers and burn down the village (Source 1). They usually resulted in American and Vietnamese casualties, so it was ineffective. There are very little advantages to Search and Destroy missions, for example the USA actually did find Viet Cong weapons hidden in villages (Source 1), so there was a very small success rate. That success rate is so small it is overlooked due to the large amount of casualties and the far larger amount of disadvantages. ...read more.

In relation to the US aims (Protect South Vietnam and build support) this tactic was very unsuccessful because the South Vietnamese hated them a lot more and no support was gained. Overall, this tactic failed completely because it didn't do anything to affect the Viet Cong's ability to fight because they gained more support due to the wrong information given to US soldiers (Source 6) and they still moved into the burned down villages. Another tactic that was used by the USA was defoliation. Defoliation consists of three main categories; Napalm, Defoliants and Agent Orange. Napalm is a type of lethal chemical that forms a flammable jelly that sticks to substances and burns everything touched when dropped from the air (Source 1). There were 400,000 tons of Napalm dropped in the Vietnam war (Source 1). Defoliants were also dropped by planes and would be sprayed across 'suspected area of ground' which sometimes included villages (Source 1). Agent Orange is a type of defoliant that released the most poison in all the herbicides used (Source 3); it was also the most dropped defoliant, 77 million liters were dropped during the war (Source 1). These were all dropped because the USA wanted to stop supplies and people from travelling along the Ho Chi Minh trail that was covered in trees, so couldn't be hit; therefore the trees had to be burned down using these substances (Source 1). ...read more.

It also didn't fully serve its purpose, and the parts that it did succeed in weren't worth the deaths suffered, thus making it ineffective overall. Overall, the most ineffective method the US used was search and destroy. The Viet Cong used many different tactics, such as tunnels and avoiding open battles that caused them to an 'unseen enemy', which cause the USA to respond with search and destroy. Even though the USA had the superior military power, they couldn't use it in open battle due to the lack of battles in the war so they couldn't win because their strengths didn't lie in guerrilla warfare. Search and destroy allowed them to use their military brute, which was ineffective because the US troops were taking out their frustration and aggression on innocent villagers which caused them to have bad publicity in the USA and also in South Vietnam where the villagers hated them and supported the Viet Cong. It was also ineffective because search and destroy didn't hinder the Viet Cong's ability to fight and gain support, in fact, they helped them gain even more support. Proof of the ineffectiveness is that the USA lost the war. Even if there was a small success rate, overall all the tactics used were ineffective when fighting the Viet Cong because they lost the war and if their tactics had been successful, they would have won. ...read more.