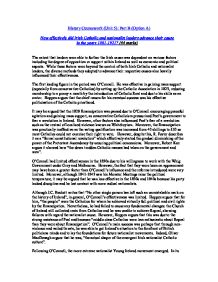 How effectively did Irish Catholic and nationalist leaders advance their cause in the years 1801-1921? (44 marks)

History Coursework (Unit 5): Part B (Option A) How effectively did Irish Catholic and nationalist leaders advance their cause in the years 1801-1921? (44 marks) The extent that leaders were able to further the Irish cause was dependent on various factors including the degree of opposition or support within Ireland as well as economic and political aspects. While these factors were beyond the control of both Irish Catholic and nationalist leaders, the diverse methods they adopted to advance their respective causes also heavily influenced their effectiveness. The first leading figure in the period was O'Connell. He was effective in gaining mass support (especially from conservative Catholics) by setting up the Catholic Association in 1823, reducing membership to a penny a month by the introduction of Catholic Rent and due to his skills as an orator. Hoppen argues that the chief reason for his eventual success was his effective politicisation of the Catholic priesthood. It may be argued that the 1829 Emancipation was passed due to O'Connell encouraging peaceful agitation and gaining mass support, as conservative Catholicism pressurized Peel's government to fear a revolution in Ireland. ...read more.

Furthermore, b**t's weak leadership made him unable to inspire his followers and he was often away from the Commons pursuing his legal career. Finally, his conservatism frustrated more radical members and caused his downfall before he was able to have any significant effect except arguing Westminster lacked the time and expertise to govern Ireland. In the late nineteenth century, nationalism was led by Parnell, whose contempt for English opinion made him a popular hero for militant Irish nationalists and while he rejected the use of violence, Fenians were willing to co-operate with him. Furthermore, E. Norman argues that people like Davitt, the Land Leaguers and Parnell were effective as they "exploited the [rural] disorders for political purposes". Additionally, Lyons argues that Parnell was effective in "fusing into one national movement all the elements of Irish protest and grievance" by the 'New Departure'. The work of Parnell, Davitt and the Land Leaguers eventually culminated in the Second Land Act of 1881 which was valuable as it delivered the 3F's to tenants. Thus, Parnell had effectively forced the government into land reform by encouraging peaceful protests, boycotts and rural agitation. ...read more.

Griffith and Collins's effectiveness as negotiators was also limited as they did not know how much authority they had and were forced into the Treaty by Lloyd George's threat of war. However, the Treaty was not an unmitigated failure: it effectively gave Ireland the status of a self governing Dominion that controlled its own internal affairs and the oath to the Crown was watered down. Thus, Sinn Fein's militant tactics combined with Griffith and de Valera's political compromise effectively achieved change quickly. Overall, it emerges that the Irish Catholic and nationalist leaders were more effective in advancing their different 'causes' in some periods than others. O'Connell's initial 'cause' was the Catholic people whom he helped by the 1829 Catholic Emancipation. However, following this, he, Young Ireland and the Fenians failed to gain Home Rule which suggests this period was less effective. Parnell was effective in advancing the 'cause' for farmers and in achieving Home Rule bills. Historians have argued that the effectiveness of the leaders was largely dictated by changing circumstances (factors such as public opinion and the attitudes of British politicians). This may explain why after 1916, the nationalist 'cause' was advanced most quickly under Sinn Fein, de Valera, Griffith and others (by the 1921 Treaty) and why Ulster Unionists failed to maintain the Union. (Word Count: 1,912 words) ...read more.