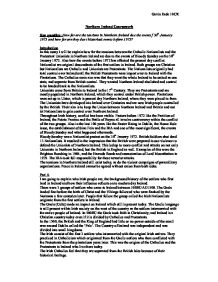 Northern Ireland Coursework Key question: How far are the tensions in Northern Ireland due the events f 30th January 1972 and how far are they due t historical events before 1972? Introduction In this essay I will be explain how far the tensions between the Catholic Nationalists and the Protestant Unionists in Northern Ireland are due to the events of b****y Sunday on the 30th January 1972. Also how the events before 1972 has affected the present day conflict. Nationalist are original descendants of the first settlers in Ireland. Both groups are Christian but Nationalists are Catholic and Unionists are Protestants. The Nationalists originally had total control over Ireland until the British Protestants were import over to Ireland with the Plantations. The Catholics main aim was that they want the whole Ireland to be united as one state, and separate from British control. They wanted Northern Ireland abolished and control to be handed back to the Nationalists. Unionists came from Britain to Ireland in the 17th Century. They are Protestants and are mostly populated in Northern Ireland, which they control under British power. Plantations were set up in Ulster, which is present day Northern Ireland, where they were placed to farm. The Unionists have developed into Ireland over Centuries and are now Irish people controlled by the British. Their aim is to keep the Union between Northern Ireland and Britain and not let Nationalists to gain control over Northern Ireland. Throughout Irish history, conflict has been visible. Factors before 1972 like the Partition of Ireland, the Potato Famine and the Battle of Boyne all involve controversy within the conflict of the two groups. Also in the last 100 years like the Easter Rising in Dublin, the Home Rule issue, the establishment of Sinn Fein and the IRA and one of the most significant, the events of b****y Sunday and what happened afterwards. b****y Sunday was a Nationalist protest on the 30th January 1972. ...read more.

These groups lead on to form such paramilitary organisations like the IRA and the UDF which still exist today in Northern Ireland. The British army still remained in Ireland to enforce Home Rule and try and control the conflict, which they did unsuccessfully. The British Government stated that they had postponed Home Rule, as the First World War was more important than the situation in Ireland. This fuelled the conflict severely, as the Nationalist people of Ireland were told that they had been granted with Home Rule. Even after the many years of war, the agreement was not carried through. The Easter Rising took place in Dublin in 1916. A paramilitary group called the Irish Republican Brotherhood (IRB) stormed the Dublin main Post Office the Easter Monday. The Protest failed and the result of their campaigning didn't really affect the conflict but the consequences afterwards caused a revelation. The British decided to execute the leaders involved with the Easter Rising, which resulted in an outrage with the Nationalists. They formed one of the most influential Catholic Political parties in the whole of Northern Ireland. Sinn Fein gained a huge amount of support as Britain became more unpopular. They campaigns were more radical and aggressive for a political party. They were the most successful parties in the British Government, as they gained 73 seats out of the 105 allocated by the British for Irish parties. Sinn Fein has been strongly linked with the IRA ever since there amalgamation of the IRB and the IV in 1919.The Irish Republican Army (IRA) was a massive threat to the Unionists, as they had union with Sinn Fein resulting in there lack of political power within the Unionists over Ireland. The Anglo-Irish War broke out in 1919. The IRA promoted guerrilla warfare against Royal Irish Constabulary (RIC) consisting with a two year conflict where thousands of soldiers died as well as the British Black and Tans army who tried to intervene. ...read more.

the Harrods b**b. The British involvement in b****y Sunday was a bigger revelation than the execution of the leaders from the Easter Rising. Investigations and enquiries have been continuing about the deaths of whether the soldiers fired upon unarmed Nationalists or whether the Nationalists were armed and shot at the soldiers, the case has never been solved. The tension increased after the events of b****y Sunday because the Nationalists had an upper hand on Britain and Northern Ireland for unjustified murders. But the Nationalists also increased the conflict by the terrorist attacks on Ulster and NI. I conclude that the tension in Northern Ireland has been significantly affected by the historical events which have significance in some way to the events of 1972. The Protestant Plantations promoted the first violent conflict between Catholics and Protestants, which was what the Catholics were doing while protesting against rule in Ulster. The Battle of Boyne also relates to angry Catholic protests as the Orange Order's, formed by the William of Orange's success at the battle against James II, campaigns encouraged violence within the Protestant communities increasing hostility. The Partition of Ireland was a very significant factor in the b****y Sunday event. The division of the country and rule of NI being handed over to Ulster caused more conflict and violence from the Nationalist opposition. The b****y Sunday protest was to campaign against the ruling of Ulster over NI, which is linked to the Partition of Ireland. In my opinion, it is a contrast of both historical and recent history that increase the tension in Northern Ireland. The events from the past all link into b****y Sunday in 1972, which then add a great deal more to the conflict, which has been visible in the past few decades. My opinion remains the same about peace as in my introduction. It will take many years for there to be peace and prosperity across the whole of Ireland as a whole country again. Gavin Eade 10CK ...read more.