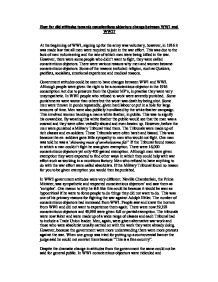 How far did attitudes towards conscientious objectors change between WW1 and WW2?

How far did attitudes towards conscientious objectors change between WW1 and WW2? At the beginning of WW1, signing up for the army was voluntary, however, in 1916 it was made law that all men were required to join in the war effort. This was due to the lack of men volunteering and the rate of which men were being killed in the war. However, there were some people who didn't want to fight, they were called conscientious objectors. There were various reasons why men and women became conscientious objectors. Some of the reasons included: religion, such as Quakers, pacifists, socialists, emotional experience and medical reasons. Government attitudes could be seen to have changes between WW1 and WW2. Although people were given the right to be a conscientious objector in the 1916 conscription Act due to pressure from the Quaker MP's, in practise they were very unsympathetic. In WW1 people who refused to work were severely punished. ...read more.

Although men were given exemption they were expected to find other ways in which they could help with war effort such as working in a munitions factory. Men who refused to have anything to do with the war effort were called absolutists. If the Military Tribunal found no reason for you to be given exemption you would then be punished. In WW2 government attitudes were very different. Neville Chamberlain, the Prime Minister, was sympathetic and respected conscientious objectors' and saw them as 'scruples'. One reason to why he felt like this could be because it would be seen as hypocritical if he were to force people to do things they did not want to do. This was one of his primary reasons for fighting the war against Adolph Hitler. The number of conscientious objectors had increased from WW1. People saw and knew the horrors from WW1 and did not want to experience them again. ...read more.