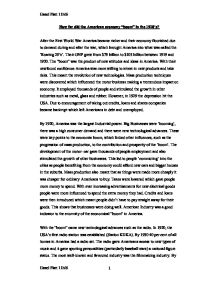 How far did the American economy boom in the 1920(TM)s?

How far did the American economy "boom" in the 1920's? After the First World War America became richer and their economy flourished due to demand during and after the war, which brought America into what was called the 'Roaring 20's'. Their GNP grew from $78 billion to $103 billion between 1919 and 1920. The "boom" was the product of new attitudes and ideas in America. With their newfound confidence America was more willing to invest in new products and take risks. This meant the revolution of new technologies. Mass production techniques were discovered which influenced the motor business making a tremendous impact on economy. It employed thousands of people and stimulated the growth in other industries such as metal, glass and rubber. However, in 1929 the depression hit the USA. Due to encouragement of taking out credits, loans and shares companies became bankrupt which left Americans in debt and unemployed. By 1920, America was the largest Industrial power. Big Businesses were 'booming', there was a high consumer demand and there were new technological advances. ...read more.

The successful economy gave people more time and money for leisure. However, the good economy didn't benefit everybody. Due to the advancement in agricultural machinery many labourers (often Black) and sharecroppers lost their jobs. (Three-quarters of a million lost their jobs during the 1920's) Many went north into the cities to seek new jobs. However, industries such as car industries only hired a small amount of blacks and many industries had enforced an all-white policy. Most black women could only get low-paid jobs as servants in white households. Thirty million people in America earned their living through farming and between 1920 and 1930 the number of farms declined. This was because of low crop prices (which benefited large companies and American consumers) as too much food was being produced. Poor earnings meant farmers could not keep up with high rent and big mortgages, which left many farming families in unhygienic conditions of squalor and poverty. These are examples of how the economy though "booming" in some prospects affected the lives of people lower down on the financial ladder. ...read more.

As taxes were lowered and gave more people money to spend, it meant there was a higher demand in products, which made companies richer therefore giving them the advantage to give out credits meaning people could buy things they could not afford. However, the economic "boom" did not benefit everyone. Farmers, blacks, working class men and new immigrants often had to face the consequences of the cheaper prices and over producing. Cheaper prices meant cheaper labour, which meant labourers were not being paid enough. Crop prices were cheaper as they were being over produced, which meant farmers could not pay their rent or mortgages which gave them poorer living conditions and they could not pay their labourers who then had to find new jobs. America's "boom" was big if short, and it benefited many. However, it was short-lived and even when at its peak it still did not benefit everybody. So in conclusion, I can draw that America's "boom" went quite far as many businesses and Americans prospered from it but it did have bad consequences, which made it hard for those in poverty and worse when the depression came. Hazel Platt 11M6 1 Hazel Platt 11M6 ...read more.