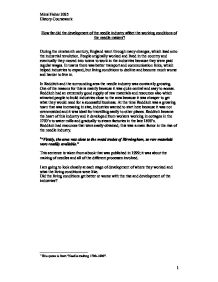 How far did the development of the needle industry affect the working conditions of the needle makers? During the nineteenth century, England went through many changes, which lead onto the industrial revolution. People originally worked and lived in the country and eventually they moved into towns to work in the industries because they were paid regular wages. In towns there was better transport and communication links, which helped industries to expand, but living conditions to decline and become much worse and harder to live in. In Redditch and the surrounding area the needle industry was constantly growing. One of the reasons for this is mainly because it was quite central and easy to access. Redditch had an extremely good supply of raw materials and resources also which attracted people to build industries close to the area because it was cheaper to get what they would need for a successful business. At the time Redditch was a growing town that was increasing in size, industries wanted to start here because it was not overcrowded and it was ideal for travelling easily to other places. Redditch became the heart of this industry and it developed from workers working in cottages in the 1700's to water mills and gradually to steam factories in the late 1800's. Redditch had resources that were easily obtained; this was a main factor in the rise of the needle industry. 1"Firstly, the area was close to the metal trades of Birmingham, so raw materials were readily available." This sentence is taken from a book that was published in 1999; it was about the making of needles and all of the different processes involved. I am going to look closely at each stage of development of where they worked and what the living conditions were like. Did the living conditions get better or worse with the rise and development of the industries? ...read more.

The young and old of each family would have been involved in carrying out the tasks. A child's dexterity and keen eyesight was considered invaluable." Another description, which shows that spitting was a popular process which young children were forced to do, is from "Household Words". It is of a young seven-year old boy and what he is required to do. 8"Before him lay bits of wire as fine hairs; and these wires he was running through the eyes of twin needles which had come from the punch. He ran the wire through each line of eyes "spitting" two dozen or so on into two wires." This shows that children had to put up with so much and they were forced into doing very dangerous work, which could be difficult, even for an adult. As the steam factories developed conditions changed. In huge factories the conditions were cramped and dimly lit, there was no electricity and few breaks. Each person did not have enough room to work properly and efficiently to get the job done properly and look after them selves at the same time. Money was the key theme that was on everyone's mind. Mill and factory owners became greedy at the thought of becoming rich and therefore employed lots of people at cheap rates to make all of the needles. Forge mill grew in size and had much more people involved in helping the deliveries to be made in due time. 9 Other processes, which were dangerous, were the scouring of the needles, stamping and eyeing. After hardening the needles would be taken to the scouring mill, where they would be made bright and shiny. The workers had to have strong backs to lift the heavy 'runners'; these were heavy slabs of wood, which moved backwards and forwards. The workmen had to work for long periods of time moving heavy loads that could injure them severely if something were to go wrong. ...read more.