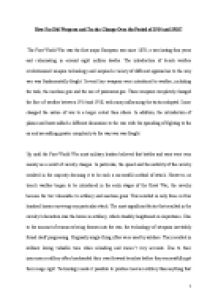 ﻿How Far Did Weapons and Tactics Change Over the Period of 1914 and 1918? The First World War was the first major European war since 1870; a war lasting four years and culminating in around eight million deaths. The introduction of trench warfare revolutionised weapon technology and inspired a variety of different approaches to the way war was fundamentally fought. Several key weapons were introduced to warfare, including the tank, the machine gun and the use of poisonous gas. These weapons completely changed the face of warfare between 1914 and 1918, with many influencing the tactics adopted. Some changed the nature of war to a larger extent than others. In addition, the introduction of planes and boats added a different dimension to the war with the spreading of fighting to the air and sea adding greater complexity to the way war was fought. Up until the First World War most military leaders believed that battles and wars were won mainly as a result of cavalry charges. In particular, the speed and the mobility of the cavalry resulted in the majority deeming it to be such a successful method of attack. However, as trench warfare began to be introduced in the early stages of the Great War, the cavalry became far too vulnerable to artillery and machine guns. This resulted in only three in four hundred horses surviving any particular attack. ...read more.

From that point onward the manufacture of poison gas increased and as technology developed, new, more effective gases were produced; mustard gas being the most lethal. First used by the German?s in 1917, this new gas had no smell giving it an element of surprise that topped the original chlorine gas. Gas attacks however could easily backfire as they depended heavily on the direction of the wind and very soon after the first attack gas masks were designed on both sides in an attempt to reduce deaths. It can thus be seen that there was a large transition in tactics from the original use of artillery weapons, used to kill people through external injuries, to the use of chemical warfare, designed to take the opposition by surprise and injure them both internally and physiologically: ?Gas! GAS! Quick, boys! ? An ecstasy of fumbling, Fitting the clumsy helmets just in time; But someone still was yelling out and stumbling And flound'ring like a man in fire or lime . . . Dim through the misty panes and thick green light, As under a green sea, I saw him drowning. In all my dreams before my helpless sight, He plunges at me, guttering, choking, drowning? (1) The fact that this graphic and emotive language directly relating to gas attacks, is represented in a famous war time poem written by Wilfred Owen (a soldier during WW1) ...read more.

Snipers were also used in the war from start to finish. The element of surprise was also adopted throughout the war, for instance, the morbid beauty of the gas attack was that it could be lethal if the enemy were unaware of it. It was for this reason that advances in chemical technology were made to find an odourless gas to give as little warning to the enemy as possible. The tactic of tunnelling was also one of the most effective, due to its element of surprise. The practice of tunnelling under the enemy trenches and planting explosives could produce devastating effects and was prominent throughout the war. In conclusion, I have argued that the most significant change to weapons in the war was the transition from cavalry to infantry, brought about by the introduction of trench warfare and the boom in artillery. This improvement in the sophistication of weapons had a direct impact upon tactics in the war due to the type of weapon necessitating how soldiers fought against the enemy. After the original change, little change occurred to either weaponry or tactics until 1915. The introduction of chemical warfare followed by the invention of tanks and eventually bomber planes presented huge changes to the original fighting procedures used in 1914. The rate of this change from 1915 onwards was also significant. This marked change is very apparent when comparing the Western Front in 1914, where artillery was their main weapon to 1918, when 412 tanks, numerous soldiers and over 1,000 compact aircraft broke through German lines. ...read more.