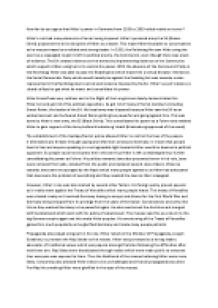 How far do you agree that Hitlers power in Germany from 1933 to 1939 relied mainly on terror?

﻿How far do you agree that Hitler?s power in Germany from 1933 to 1939 relied mainly on terror? Hitler?s rule had many elements of terror being imposed. Hitler?s personal army the SA (Brown Shirts) projected the strict discipline of Hitler as a leader. This made Hitler favorable to conservatives as he was portrayed as a reliable and strong leader. In 1933, the Reichstag fire saw Hitler using the event as a scapegoat to get rid of his political enemy, the Communist, even though there was a lack of evidence. The SA created violence on the streets by implementing violence on the Communist which supports Hitler using terror to control his power. With the absence of the Communist Party in the Reichstag, Hitler was able to pass the Enabling Act which made him a virtual Dictator. ...read more.

It eliminated any threats through spying and informers all around Germany. It meant that people lived in fear and anyone speaking in a not agreeable light towards Hitler would be deemed a political opponent. So people could not express their criticism thus Hitler is left unchallenged thus further consolidating his power as Fuhrer. His policies towards Jews also presented terror in his rule, Jews were removed from jobs, isolated from the public and declared second class citizens. Violence towards Jews were encouraged by the Nazis which many people agreed to as Hitler had advocated that Jews were the problem of everything and they needed the Jews as their scapegoat. However, Hitler?s rule was also marked by several other factors. His foreign policy proved popular as it mainly went against the Treaty of Versailles which many people hated. ...read more.

Thus the likelihood of the masses believing Hitler were more likely. Censorship also allowed Hitler views to be unchallenged and that all propaganda would be Pro-Nazi thus making Hitler more glorified in the eyes of the masses. Education gained Hitler a following from children. Children were thought Nazi curriculum, in which they were racially superior and the history of Germany were glorified to make them more nationalistic. Children were indoctrinated with Nazi believes from young which would guarantee Hitler loyalty from them. Hitler also set up Hitler youth and the Maiden?s league which promoted Aryan and traditional values and it also took up their time thus they wouldn?t be influenced into thinking anything other than their beloved Fuhrer. Terror played a big part and I think that it played it a bigger part than other factors as it terror ensured the strength of his power to be stable as he would be unchallenged and he could get rid of opposition. ...read more.