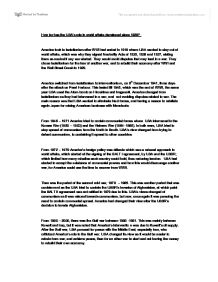 How far has the USAs role in world affairs developed since 1929?

How far has the USA's role in world affairs developed since 1929? America took to Isolationism after WWI had ended in 1918 where USA wanted to stay out of world affairs, which was why they signed Neutrality Acts of 1935, 1936 and 1937, stating them as neutral if any war started. They would avoid disputes that may lead to a war. They chose isolationism for the fear of another war, and to rebuild their economy after WWI and the Wall Street Crash in 1929. America switched from isolationism to interventionism, on 8th December 1941, three days after the attack on Pearl Harbour. This lasted till 1945, which was the end of WWII, the same year USA used the Atom b**b on Hiroshima and Nagasaki. ...read more.

USA's view changed from trying to defeat communism, to containing it spread to other countries. From 1972 - 1979 America's foreign policy was d�tente which was a relaxed approach to world affairs, which started at the signing of the SALT I agreement, by USA and the USSR; which limited how many missiles each country could hold, thus reducing tension. USA had started to accept the existence of communist powers and how this would discourage another war, for America could use the time to recover from WWII. Then was the period of the second cold war, 1979 - 1985. This was another period that was containment as the USA tried to contain the USSR's invasion of Afghanistan, at which point the SALT II agreement was not ratified in 1979 due to this. ...read more.

The main causes of change were WWII which had changed the USA from Isolationist to Interventionist. This change had meant USA was involved in world affairs once again like the cash and carry system. Another main cause was the collapse of the Soviet Union in 1989 which was also the year the Berlin Wall fell, which was a main cause as America had 'defeated' their main rival. Through this time period, USA had realized that they were not able to defeat their enemies but the best they could do was to contain them and pursue for peace, as they did in the D�tente stage. But to get d�tente, they have to get through the long period of containment where the pace of change was the slowest. ...read more.