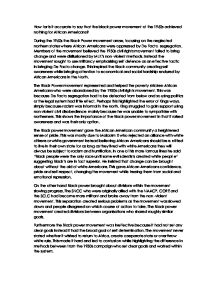 How far is it accurate to say that the black power movement of the 1960s achieved nothing for African Americans?

How far is it accurate to say that the black power movement of the 1960s achieved nothing for African Americans? During the 1960s the Black Power movement arose, focusing on the neglected northern states where African Americans were oppressed by De Facto segregation. Members of the movement believed the 1950s civil rights movement failed to bring change and were disillusioned by MLK's non-violent methods. Instead the movement sought to use militancy emphasising self defence as an effective tactic in bringing De Facto change. This inspired the Black community creating self awareness while bringing attention to economical and social hardship endured by African Americans in the North. The Black Power movement represented and helped the poverty stricken African Americans who were abandoned by the 1950s civil rights movement. ...read more.

The Black power movement gave the African American community a heightened sense of pride. This was mostly due to Malcolm X who rejected an alliance with white citizens or white government instead believing African Americans should be entitled to live in their own state for as long as they lived with white Americans they will always be subject to racism and humiliation. In one of his more famous lines he said "Black people were the only race until some evil scientists created white people" suggesting Black's are in fact superior. He insisted that change can be brought about without the aid of white Americans. This gave African Americans confidence, pride and self respect, changing the movement while freeing them from social and emotional repression. ...read more.

The movement never stated whether it wished to return to Africa, create a separate state or overthrow white rule. This made it hard and led to confusion while highlighting the difference in methods between from the 1950s campaign who set clear goals and worked within the system. In conclusion I believe that the Black Power movement was partially effective because it brought change to African Americans in the northern states. The Black Panthers were born out of the black power movement and created a neighbourhood watch, protected Black people from police brutality and racist groups. This was effective because it meant that someone was there to directly ensure African Americans were not being mistreated through De Facto segregation. On the other hand the movement made no real breakthroughs instead it shifted federal support to king. It could be said that the only achievement was an increase in African American self esteem. ...read more.