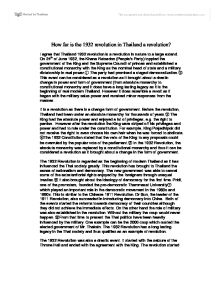 How far is the 1932 revolution in Thailand a revolution?

How far is the 1932 revolution in Thailand a revolution? I agree that Thailand 1932 revolution is a revolution in nature to a large extend. On 24th of June 1932, the Khana Ratsadon (People's Party) toppled the government of the King and the Supreme Council of princes and established a constitutional monarchy with the King as the nominal head of state and a military dictatorship in real power.1 The party had promised a staged democratization.2 This event can be considered as a revolution as it brought about a drastic change in power and form of government (from absolute monarchy to constitutional monarchy and it does have a long lasting legacy as it is the beginning of real modern Thailand. However it does resemble a revolt as it began with the military seize power and received minor responses from the masses. It is a revolution as there is a change form of government. ...read more.

On the other hand the role of military was also established in the revolution. Without the military the coup would never happen. 8From that time to present the Thai politics have been heavily influenced by the military. One example can be the 2006 coup which ousted the elected government of Mr. Thaksin. The 1932 Revolution has a long lasting legacy in the Thai society and thus qualifies as an example of revolution. The 1932 Revolution was also a drastic event. It started with the seizure of the Throne Hall and ended with the agreement with the King. The revolution started in the morning of 24th of June 1932 with the takeover of the First Cavalry Regiment of the Royal Guards and by the evening the revolutionaries had already controlled the situation. On 27th of June, the first constitution of Siam came out. It was like the Russian October Revolution which also spanned only a couple of days. ...read more.

Under this concept the 1932 coup d'�tat may not be recognized as a revolution as it lacks mass mobilization. It is also different from the conventional concept that revolutions should be violent. In contrary, the 1932 event was bloodless and peaceful. However, I think that the word 'revolution' is employed to denote a change in socio-political institutions basically?, unlike a coup where a military faction deposes the civil government and assumes power without changing the political or social structure of the country. The Thai Revolution, however, does change Thailand from an absolute monarchy into a constitutional monarchy. It also has a heavy influence in today's Thai society as it brought about the ideology of democracy. It also happened as sudden as other revolutions. As I think that the most important principle of revolution should be the change of political and social structure of one country, I agree that the 1932 Thai Revolution is a real example of revolution. ...read more.