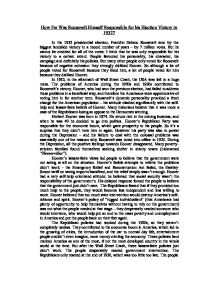 How Far Was Roosevelt Himself Responsible for his Election Victory in 1932?

How Far Was Roosevelt Himself Responsible for his Election Victory in 1932? In the 1932 presidential election, Franklin Delano Roosevelt won by the biggest landslide victory in a record number of years - by 7 million votes. But he cannot be credited for all of the votes: I think that he was only responsible for his victory to a certain extent. People favoured his personality, his character, his campaign and definitely his policies. But many other people only voted for Roosevelt because of negative cohesion: they strongly disliked Hoover. So although a lot of people voted for Roosevelt because they liked him, a lot of people voted for him because they disliked Hoover. In 1932, in the aftermath of Wall Street Crash, the USA was left in a huge mess. The problems of America during the 1920s and 1930s contributed to Roosevelt's victory. Hoover, who had won the previous election, had failed to address these problems in a beneficial way, and therefore the Americans were apprehensive of voting him in for another term. Roosevelt's dynamic personality provided a fresh change for the American population - his attitude clashed significantly with the self-help and laissez-faire beliefs of Hoover. Many historians believe that it was more a case of the Republicans losing as oppose to the Democrats winning. ...read more.

The people had little faith in Hoover and his party, which explains why Roosevelt won by such a landslide victory. Not only had Hoover's measures failed to produce recovery, but the economy was sinking even further into depression. The people thought Hoover was a cold, heartless man. The Republicans were also seen as very unsympathetic - for example, the Bonus March. Thousands of servicemen who had fought in World War One peacefully asked for their war bonuses early. Hoover refused to meet them and sent General MacArthur to deal with the situation. MacArthur ordered the troops and police to use tear gas and to burn the marcher's camps. This definitely angered a lot of people and only brought down Hoover's reputation, and it only confirmed people's views that Hoover simply did not care. Roosevelt had a different attitude to Hoover, different policies and a different campaign, which eventually prompted the people to vote for him in 1932. His policies included state intervention, which happened to be exactly what the country needed at that stage. Roosevelt believed that the only way to come out of the depression was by the federal government helping the people. He promised a quick reaction ("this nation asks for action, and action now"). He also guaranteed government schemes to end unemployment, the revival of industries, relief for the poor, protection for workers etc. ...read more.

The people had faith that because he had successfully overcome serious complications which threatened his life, he was qualified to help America overcome their problems. His grand tour convinced many apprehensive voters that Roosevelt was the candidate worth voting for. Roosevelt especially appealed to the unemployed, homeless and poverty-stricken: he had assured them of quick, effective action. I think that a main factor involved in the victory of the Democrats was negative cohesion. A lot of people were indifferent about Roosevelt and his party, but they were so against Hoover and the Republicans that they voted for the Democrats. It could have even gone as far as people disliking both candidates, but disliking Hoover more. This was an important factor because it contributed to the biggest landslide victory in many, many years. So I think that Roosevelt himself was responsible for his election victory to a certain extent: when it came to his policies, campaign and character, the people vastly preferred Roosevelt to Hoover. However, Roosevelt wasn't responsible for a lot of votes he received: many people voted for him because they disliked Hoover (because of his lack of action following the Wall Street Crash), and not because they particularly liked Roosevelt. Some people associated Hoover with the Depression as well, and didn't want anything to do with him in the future. So although Roosevelt was voted for because people genuinely liked him, he was also voted for because people strongly disliked his opponent. ?? ?? ?? ?? ...read more.