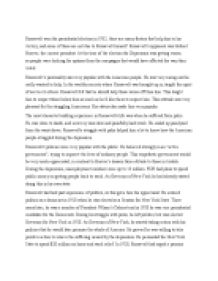 ﻿Roosevelt won the presidential election in 1932, there are many factors that help him to his victory, and some of these are not due to Roosevelt himself. Roosevelt?s opponent was Herbert Hoover, the current president. At the time of the election the Depression was getting worse, so people were looking for options from the campaigns that would have affected the way they voted. Roosevelt?s personality was very popular with the American people. He was very caring and he really wanted to help. ...read more.

The most character building experience in Roosevelt's life was when he suffered from polio. He was close to death, and recovery was slow and painfully hard work. He ended up paralysed from the waist down. Roosevelt's struggle with polio helped him a lot to know how the American people struggled during the depression. Roosevelt's policies were very popular with the public. He believed strongly in an ?active government?, trying to improve the lives of ordinary people. This empathetic government would be very much appreciated, in contrast to Hoover?s laissez-faire attitude to those in trouble. ...read more.

Three years later, he was a member of President Wilson?s Cabinet and in 1920 he was vice presidential candidate for the Democrats. During his struggle with polio, he left politics, but was elected Governor for New York in 1928. As Governor of New York, he started taking action with his policies that he would later promise the whole of America. He proved he was willing to take positive action to relieve the suffering caused by the depression. He persuaded the New York State to spend $20 million on home and work relief. In 1928, Roosevelt had urged a pension scheme and unemployment insurance scheme to be set up. ...read more.