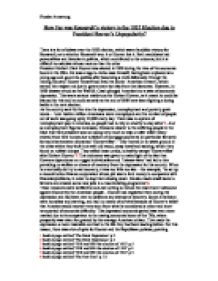 How Far was Roosevelts victory in the 1932 Election due to President Hoovers Unpopularity?

How Far was Roosevelt's victory in the 1932 Election due to President Hoover's Unpopularity? There is a lot of debate over the 1932 election, which was a landslide victory for Roosevelt, as to whether Roosevelt won it or Hoover lost it. Both candidates had personalities and histories in politics, which contributed to the outcome, but it is difficult to calculate whose more so than the other President Herbert Clark Hoover was elected in 1928 during the time of the economic boom in the USA. He was a rags-to-riches case himself, having been orphaned at a young age and gone into politics after becoming a multi-billionaire through the mining industry. Hoover himself had lived the iconic 'American Dream', which earned him respect not just in government but also from the electorate. However, in 1929 disaster struck as the Wall St. Crash plunged America into a state of economic depression. This was a serious misfortune for Herbert Hoover, as it meant he could be blamed for this and he could as early as the end of 1929 have been fighting a losing battle in the next election. As the country sank further into the depression, unemployment and poverty grew worse - 'over twelve million Americans were unemployed and the number of people out of work was going up by 12,000 every day. ...read more.

For this reason, there was a lot of spite for Hoover and his Republican policies, pointing towards a likelihood that whoever the Democrat candidate may have been in the next election, a lot of people would have voted for them so as not to have Hoover as president for a second term. Hoover also did a very undiplomatic thing just before the election (so it would have stuck in the voter's mind) - he ordered the police to arrest the 'Bonus Marchers', who were veteran soldiers who wanted the pension they had been promised immediately because they were struggling with the depression. These men were heroes in the eyes of the people, and on Hoover's orders two people were killed with tear gas and many others injured. This lost a lot of sympathy and therefore votes for Hoover. Roosevelt's election campaign was cleverly structured to diplomatically call out to the people who had been hit by the depression - he once summed up this belief in these words 'These unhappy times call for the building of plans... that put their faith once more in the forgotten man at the bottom of the economic pyramid'4. Here he subtly references the idea that Hoover had neglected his people, and in particular the 'forgotten man'. ...read more.