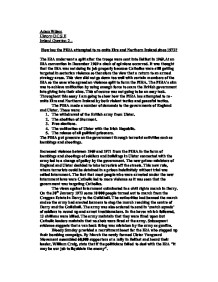 How has the PIRA attempted to re-unite Eire and Northern Ireland since 1972?

Adam Wilson History G.C.S.E Ireland Question 2 - How has the PIRA attempted to re-unite Eire and Northern Ireland since 1972? The IRA underwent a split after the troops were sent into Belfast in 1969.At an IRA convention in December 1969 a clash of opinions occurred. It was thought that the IRA was not doing its job properly because Catholics were still getting targeted in sectarian violence so therefore the view that a return to an armed strategy arose. This view did not go down too well with certain members of the IRA so the ones who agreed on violence split to form the PIRA. The PIRA's aim was to achieve unification by using enough force to scare the British government into giving into their aims. This of course was not going to be an easy task. Throughout this essay I am going to show how the PIRA has attempted to re-unite Eire and Northern Ireland by both violent tactics and peaceful tactics. The PIRA made a number of demands to the governments of England and Ulster. These were: 1. The withdrawal of the British army from Ulster. 2. The abolition of Stormont. 3. Free elections. 4. The unification of Ulster with the Irish Republic. 5. The release of all political prisoners. The PIRA put pressure on the government through terrorist activities such as bombings and shootings. Increased violence between 1969 and 1971 from the PIRA in the form of bombings and shootings of soldiers and buildings in Ulster connected with the army led to a change of policy by the government. ...read more.

They also wanted to weaken the will of the British government to fight them. After 1984, the PIRA decided to change tactics. There are a number of reasons as to why they did this. 1. Mrs Thatcher, Conservative prime-minister came to power in 1979 and refused to give into the pressure of the PIRA. 2. The hunger strikes by some members of the PIRA had achieved nothing. Bobby Sands was the first person to die from hunger strikes. 3. 15 years of violence, bombing and death had achieved nothing for the PIRA. Regular bombing in England had cost the British government increasing amounts of money. Adam Wilson History G.C.S.E Ireland Question 2 - How has the PIRA attempted to re-unite Eire and Northern Ireland since 1972? In October 1984, the IRA bombed the Conservative Party conference at Brighton killing members of the Conservative Party and nearly killing Mrs Thatcher. Soon afterwards, secret meeting were held between the British and Irish governments and a year later, the Anglo-Irish Agreement was signed by Mrs Thatcher, and Garret Fitzgerald, the Taoiseach of the Republic of Ireland at Hillsborough Castle in November 1985. The agreement said: 1. The British Government recognised the Republics right to make proposals on matters relating to Northern Ireland. 2. The Republic recognised that a United Ireland was a long-term aim that would only come about with the approval of the majority of Northern Ireland. 3. Both governments agreed to trey and make Northern Ireland a place where everyone could live in peace, free from discrimination and intolerance. ...read more.

For the first time since 1973, Ulster was to have its own government or assembly. There were six main points of the new assembly, these were: * An assembly of 108 MP's was to exist, elected by Proportional Representation. * The assembly was to have power over the six counties of Ulster. * A North/South Ministerial Council involving both ministers from Ulster and Eire was to meet to consult issues affecting all of Ireland. * The European Convention on Human Rights was to be fully incorporated into the laws of Ulster. Adam Wilson History G.C.S.E Ireland Question 2 - How has the PIRA attempted to re-unite Eire and Northern Ireland since 1972? * All prisoners, whose organisations had given up violence, were to be released on license within two years. * The decommissioning of terrorist weapons was to begin at an agrred point in the future. In January 2000, the Northern Ireland assembly began with David Trimble as First Minister. The Northern Ireland assembly consisted of both Protestant and Catholic ministers, e.g. Martin McGuinnes as Minister for Education. The matter of decommissioning terrorist weapons still hampers the peace process in Northern Ireland. After the attacks on the World Trade Centre building in New York on September 11th 2001, huge pressure was put on the PIRA to decommission its weapons and on October 23rd, they announced that they had begun a process of putting arms out of use. The Independent International Commission on Decommissioning verified this. Not all unionists are satisfied and therefore it will be quite a while before we see a full end to the conflict in Northern Ireland. ...read more.