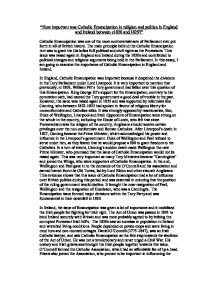 &quot;How important was Catholic Emancipation in religion and politics in Englandand Ireland between c1820 and 1829?&quot;

He was not a revolutionary and never urged a Civil War. His oratory and Irish grievances brought the Irish people together towards this issue. O'Connell formed the Catholic Association, which had an affordable fee of 1p a head. Priests also joined the Association, who proved to be important in influencing the thought of the Irish people. The members of the Association grew larger and larger and in London, this was seen as a threat to public order. The issue became further serious with O'Connell deciding to offer himself as a candidate in the by-election being fought in County Clare, Ireland in 1828. Not surprisingly, he won the seat: the majority of the voters in the constituency were Catholics, and probably members of the Association. Wellington and Peel at first decided to resist the demands of the Catholic Association and declared that O'Connell would not be allowed to take his seat in Parliament. The decision was not popular and led to demonstrations all over Ireland. However, Peel and Wellington were unwilling to turn Ireland into a battlefield for the sake of principle of resisting Catholic advance, thus, in 1829; Parliament passed the Roman Catholic Emancipation Act. The evidence portrays that the aim to pass Catholic Emancipation was the sole aim of the Irish politicians between 1820 and 1829. ...read more.