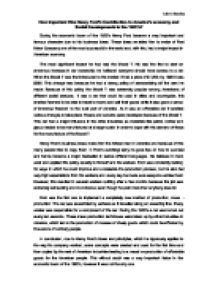 How Important Was Henry Fords Contribution to Americas economy and Social Developments in the 1920s?

Luis A. Sanchez How Important Was Henry Ford's Contribution to America's economy and Social Developments in the 1920's? During the economic boom of the 1920's Henry Ford became a very important and famous character due to his business ideas. These ideas enabled him to make of Ford Motor Company one of the most successful in the world and, with this, had a major impact in American economy. The most significant impact he had was the Model T. He was the first to start an enormous increase in car ownership; he believed everyone should have access to a car. When the Model T was first introduced to the market it had a price of $1,200, by 1928 it was $295. ...read more.

As it was an affordable car it enabled various changes to take place. Roads and suburbs were developed because of the Model T. This car had a major influence in the other industries as materials like petrol, rubber and glass needed to be manufactured at a larger scale in order to cope with the demand of these for the manufacture of the Model T. Henry Ford's business ideas made him the richest man in America and because of this many people tried to copy them. In Ford's autobiography he gave tips on how to succeed and hence became a major bestseller in twelve different languages. ...read more.

The car was assembled by workers as it travelled along an assembly line. Every worker was responsible for a component of the car. During the 1920's a car was turned out every ten seconds. These mass production techniques were taken up by other industries in America, which led to the production of masses of cheap goods which could be afforded by thousands of ordinary people. In conclusion, due to Henry Ford's ideas and principles, which he rigorously applied to the way his company worked, some concepts were created and used for the first time and then copied by the rest of American industries leading to a massive production of affordable goods for the American people. This without doubt was a very important factor in the economic boom of the 1920's, however it was not the only one. ...read more.