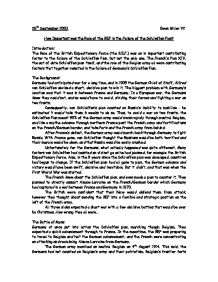 How Important was the Role of the BEF in the Failure of the Schlieffen Plan?

26th September 2003 Ewan Miller Y2 How Important was the Role of the BEF in the Failure of the Schlieffen Plan? Introduction: The Role of the British Expeditionary Force (the B.E.F.) was an in important contributing factor to the failure of the Schlieffen Plan, but not the only one. The French's Plan XIV, the out of date Schlieffen plan itself, and the role of the Belgian army all were contributing factors that together resulted in the failure of Germany's Schlieffen Plan. The Background: Germany had anticipated war for a long time, and in 1905 the German Chief of Staff, Alfred von Schlieffen devised a short, decisive plan to win it. The biggest problem with Germany's location was that it was in between France and Germany. In a European war, the Germans knew they could not, and so would have to avoid, dividing their forces and fighting a war on two fronts. Consequently, von Schlieffen's plan counted on Russia's inability to mobilise - he estimated it would take them 6 weeks to do so. Thus, to avoid a war on two fronts, the Schlieffen Plan meant 90% of the German army would cross rapidly through neutral Belgium, and like a scythe advance through northern France past the French army and fortifications on the French/German border, and take Paris and the French army from behind. After France's defeat, the German army could march back through Germany to fight Russia. With France gone, von Schlieffen thought the Russians would be both terrified and their morale would be down, and that Russia would be easily crushed. ...read more.

French ordered his five divisions to make defences at the nearby Mons canal. This bought the BEF one day before conflict with the German First army. When the German army, under von Kluck, reached Mons, he ordered a massive offensive through the woods. The British's fantastic marksmanship with rifles led the Germans to believe they were facing machine guns, and after the offensive, von Kluck had achieved nothing. But the BEF had achieved in holding up the German army, and giving the French army time to move and protect Paris. But the BEF could not halt the entire German advance - only the French army could do that, with the French armies retreating, and knowing that the BEF would have to do the same, or face the whole German army on their own, Sir French ordered a retreat. Von Kluck didn't give chase, but instead concentrated on the casualties he had sustained, though ultimately he killed 8,000 of the BEF's rear guard. Sir John French himself recommended to Kitchener, the British War Minister, that the BEF make a full withdrawal to the coast. Kitchener, however, rejected the suggestion and the BEF retreated to meet the French at the Marne. The Battle of the Marne The battle at Marne was one of the most decisive battles in The First World war, not because it resulted in the failure of the Schlieffen Plan, but because it ended in stalemate. The First battle of the Marne was between 6-12th September 1914. ...read more.

The Russians' early mobilisation left the German right flank unprotected, and because of this, when the Germans changed their plan and instead of going around to the west of Paris, they attacked it from the east, where they faced the French army and the BEF they were beaten. The Schlieffen plan ran war on a timetable. If something changed, the rest of the plan would go wrong. The Schlieffen Plan was flawed even when it wasn't out of date 9 years before. It gambled on factors it had no control over, like the BEF. Instead of asking how the plan could fail, maybe we should be asking how could it have worked? The Belgians and BEF slowed the Germans, the early Russian mobilisation weakened them. The French and BEF beat them. All the causes were linked together. The role of the BEF was a very important factor in the failure of the Schlieffen plan for two main reasons. Firstly, the Schlieffen plan had not counted on meeting the BEF at all, and their morale decreased after facing such well trained troops, and the fact that the BEF gave the French army time to stop the German army at Marne. If the BEF weren't there, the Germans, regardless of whether they marched around to the west or straight to the east of Paris, could have taken both it and the French army from behind resulting in the overall success of the Schlieffen plan. In the end, the Schlieffen plan really did fail. It ended up with exactly the opposite it had intended. It ended up with a stalemate and leaving Germany fighting a war on both sides which it would eventually lose. ...read more.