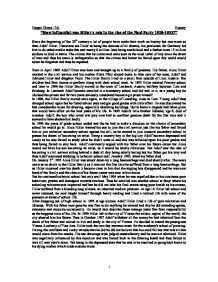 Harpal Chima 13A History "How influential was Hitler's role in the rise of the n**i Party 1920-1933?" Since the beginning of the 20th century a lot of people have made their mark on history but non-more so than Adolf Hitler. Historians see Hitler as being the demons of all dreams, his patriotism for Germany led him to do unbelievable tasks that saw nearly 6 million Jews being annihilated and a further more 15 million soldiers to died in battle. The crimes that he committed were seen as the most lethal of any since the dawn of man and thus his name is unforgettable so that the crimes and horror he forced upon this world would never be forgotten and thus be repeated. Born in April 1889 Adolf Hitler was born and brought up to a family of peasants. His father, Alois Hitler worked in the civil service and his mother Klara P�lzl stayed home to take care of her sons, Adolf and Edmund Hitler and daughter Paula. The Hitler family lived on a small farm outside of Linz, Austria. The children had farm chores to perform along with their school work. In 1895 Hitler entered Primary school and later in 1896 the Hitler family moved to the town of Lambach, Austria, halfway between Linz and Salzburg. In Lambach Adolf became enrolled in a monastery school and did well in it, as a young boy he idolised the priests and for two years seriously considered becoming a priest himself. In 1898, the Hitler family moved once again, to the village of Leonding, close to Linz. Young Adolf thus changed school again but he found school easy and got good grades with little effort. He also discovered he had considerable talent for drawing, especially sketching buildings. But at home a tragedy had taken place that would have effect on the later years of his life. ...read more.

During the late 1920's the n**i party had very little appeal to the normal German people and the ideologies and dogma that the n**i party was based upon did not attract support from any specific group within the masses. This was shown by the poor results of the 1927 when the n**i party won only 1 seat in the Reichstag. But this all changed once the world-wide depression struck in late 1929 when Wall Street collapsed thus causing world wide economies to plunder. This effected Germany most as American firms called back in reparation loans that the German economy survived upon. After the Wall Street collapse the economy when into the Great Depression which seemed to get ever worst as the government tried to cure the economic problems of the country. As the depression continued unemployment soured to rates that were never imaginable and this was the ideal breeding ground where by a dictator was needed to stand up above the rest and help the people to survive in these hard times. This was were Hitler saw his chance of taking power and thus becoming dictator of Germany. In 1930 elections were called for and the Nazis used their extreme propaganda tactics to gain support from the population. Hitler's grand speeches caught the ears of the people and his popularity started to increase as people begged for someone to save them from the poverty trap that the Great Depression brought about. Hitler seemed to offer something for everyone and he attracted people from all walks of life in Germany. He appealed to all the social classes within the German population and the n**i party used every trick in the book to get the message across to the people. When the votes were made on the 14th September 1930, the Nazis received 6,371,000 votes thus entitled to 107 seats in the German Reichstag. It was a stunning victory for Hitler and the n**i party. ...read more.

This showed that although he was a very influential to the people his influence did not seem to be very strong within other n**i leaders. It showed that Hitler was not liked within the n**i party and that he was seen as over ambitious and thus he was a commodity to the n**i movement and not a key figure within the n**i party. Overall it can be said that although there are several negative aspects to Hitler's personality and although his influence upon the rise of Nazism is a slight bit questionable it is unquestionable that he was the leader of the n**i movement. Hitler was the one that inspired the German Workers Party to succeed into becoming the largest party within the German Reichstag. His personality is undoubtedly the most famous within the Third Reich, Hitler was and still is seen was the triumph card to the n**i movement. Without Hitler it can be said that that the n**i movement would have never started, Nazism would have never grown, the Second World War would have never occurred and the Holocaust would remain in nightmares not in history books. Thus answering the question from the evidence that has presented it can be said that with little doubt Hitler was the most influential force in the rise of the n**i party, his character, ambition, patriotism, intelligence, attitude, personality, ideologies, military knowledge, opinions and speech making ability made him the main reason in why people in Germany supported the n**i movement. Because of his ideas upon communism he was able to fund the n**i movement, because of his ideas upon the Treaty of Versailles he gained support from the Nationalists, because of his ideas on the economy he gained the support from the working class and because of his ideas upon the Jewish problem he gained the support from most of the German population. Hitler was the main reason in why Nazism rose and became such a power in Europe, he is the main reason in which Nazism grew out of and he is the main reason in which Nazism fell. 1 1 ...read more.