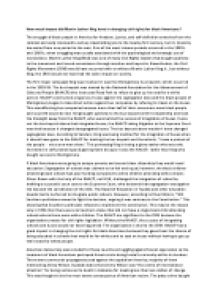 How much impact did Martin Luther King have in changing civil rights for black Americans?

Transfer-Encoding: chunked ﻿How much impact did Martin Luther King have in changing civil rights for black Americans? The struggle of black people in America for freedom, justice, and self-definition stretches from the colonial and early nineteenth-century slaveholding era to the twenty-first century, but its intensity has varied from one period to the next. One of the most intense periods occurred in the 1950?s and 1960?s, when struggling was usually associated with the psychological and strategic use of nonviolence. Martin Luther King (MLK) was one of many Civil Rights leaders that bought publicity to the movement and issued nonviolence through marches and boycotts. Nevertheless, the Civil Rights Movement (CRM) would have occurred with or without Martin Luther King Jr., but without King, the CRM would not have had the same impact on society. The first major campaign King was involved in was the Montgomery bus boycott, which occurred in the 1955-56. The bus boycott was started by the National Association for the Advancement of Coloured People (NAACP) who instructed Rosa Park to refuse to give up her seat for a white person. NAACP constructed a legal court case against the segregation laws and the black people of Montgomery began to take direct action against bus companies by refusing to travel on the buses. ...read more.

Dudziak states that Jimmy Wilson was ?the centre of international attention? for being sentenced to death in Alabama for stealing less than two dollars of change. This was thought to be the most severe consequence of American racism. The petty crime bought to surface international concern because Wilson?s case received international coverage. There were critical articles being published in newspapers all across the world and the communist used Wilson?s story as propaganda. The Jimmy Wilson case bought publicity all around the world due to communist propaganda and aided the CRM. This showing that King is not the only one to bring publicity to the CRM. The March on Washington which was organised and successfully lead by King without the support from President Kennedy and Roy Wilkins. The aim of the March was to encourage to pass a civil rights bill through public relations, media attention gave the March national exposure because it impressed people all around the world. The March may have had a part in passing the Civil Rights Bill (CRB) of 1964 as it showed a united nation. President Kennedy death could be also credited in passing the CRB. ...read more.

This limited the activist because they couldn?t afford paying the fine when they are living in poverty. However, what occurred in Chicago was the purpose of the Civil Rights Act of 1968, which is a legislation to provide equal housing opportunities. It made it legal for someone to be decimated for their race, or national origin when buying a house. It was a federal crime to force or threaten injure, intimidate, or interfere with anyone because of their race, colour, religion, or national origin. Overall, King is the one radiant name of the fight for racial equality that everyone knows, he stole the limelight from those that have been forgotten or who were not accorded the recognition they deserved. King played a wonderful leader for the CRM because he bought publicity through his peaceful protest and winning the Nobel Peace Prize. To have a day for himself shows the impact he made to the life of black Americans during the CRM. King may have helped the CRM before his assassination, but was given too much credit because others, such as Ralph Abernathy, Claudette Colvin, Kasturba Gandhi, Malcolm X and etc. where forgotten. After King?s death the life of black Americans did not brighten up because the fight for equality still occurring with new leaders. ...read more.