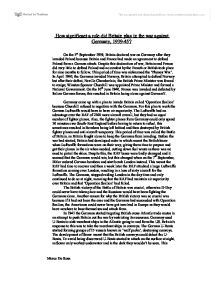 How significant a role did Britain play in the war against Germany, 1939-45?

How significant a role did Britain play in the war against Germany, 1939-45? On the 3rd September 1939, Britain declared war on Germany after they invaded Poland because Britain and France had made an agreement to defend Poland from a German attack. Despite this declaration of war, Britain and France did very little to defend Poland and no combat by the French or British took place for nine months to follow. This period of time was nicknamed the 'Phoney War'. In April 1940, the Germans invaded Norway; Britain attempted to defend Norway but after their defeat, Neville Chamberlain, the British Prime Minister was forced to resign; Winston Spencer Churchill was appointed Prime Minister and formed a National Government. On the 10th June 1940, France was invaded and defeated by Italian-German forces; this resulted in Britain being alone against GermanY. Germany came up with a plan to invade Britain called 'Operation Sealion' because Churchill refused to negotiate with the Germans. For this plan to work the German Luftwaffe would have to have air superiority. The Luftwaffe had an advantage over the RAF of 2300 more aircraft overall, but they had an equal number of fighter planes. ...read more.

Furthermore, American merchant ship production was such that the Americans were building and launching them faster than the German U-Boats could destroy them. In the end, the U-Boat losses were such that the Germans gave up on their attempt to break British trading routes and from May 1943 attacks on British convoys were increasingly less frequent and successful. The consequences of the Battle of the Atlantic was the entry of the US in Europe and ultimately, thanks to the allied victory, D-Day was able to take place, opening the war on another front and stretching Germany's resources. Another great contribution by the British occurred in North Africa when in September 1940, Italian forces invaded Egypt, where a number of Allied forces were based. A counter-attack by British General O'Connor was successful despite his army being outnumbered 10 Italian soldiers to one. General O'Connor could have gone on to conquer the rest of Northern Africa but instead, Churchill ordered for the troops to be sent to defend Greece and Crete where, in the end, little was achieved. Meanwhile, Hitler sent Rommel and the Afrika Korps to support the Italians opening a second front for the Germans and, by July, the British were pushed all the way back to the Egyptian border at El Alamein. ...read more.

This opened yet another front for the Germans to fight on and spread their resources even further, weakening the army in the east and therefore helping the Russians. The allied troops continued to pour in and fight the Germans occupying France and by September 1944 the Germans had been entirely pushed out of France and Germany invaded. Britain made major contributions to the war against the Germans, had Britain surrendered in 1940-1941 when she fought alone the war would have unfolded very differently. After this, the contribution declined comparatively to the USSR and USA even if technically, her contribution increases as the war goes on. The USSR won the war on the Eastern Front, where 70% of German resources were placed, eventually reaching Berlin and winning the war, but Britain helped this by opening other fronts on the West and therefore stretching German resources. The USA contributed with its vast industrial production and its help in the war efforts on during the bombings of Germany, by fighting in the Pacific and on D-Day, but essentially had Britain been defeated by the Germans, the Americans could not have entered the war in Europe, because they would have nowhere to launch any sort of attack from. So Britain's contribution was vital, but declined comparatively as the war went on. Marco De Rosa Marco De Rosa ...read more.

A well written response to the question; the student clearly understands the facts involved with the war. The argument, whilst not always explicit, is evident in the answer and is very well consolidated in the conclusion. The student is very ...

A well written response to the question; the student clearly understands the facts involved with the war. The argument, whilst not always explicit, is evident in the answer and is very well consolidated in the conclusion. The student is very good with picking out the importance of Britain's involvement and reasoning why. Above this, they highlight a key factor to the war (America's contribution) as an alternative and opens up the essay very well. The introduction sets the scene well for the essay, although I would avoid giving such a lengthy narrative to start off, but this is not too much of an issue here.

The student demonstrates a clear understanding to the level of analysis needed in the essay. They link their points well and although the argument may be 'hazy' in one or two areas, the argument guides the essay well. This gave way to a clear structure which made it easier to follow the argument. The judgement made came to no surprise when reading the conclusion, demonstrating the fluency of the argument and essay throughout. Whilst there were areas where I disagreed with the student, it was only natural to do so and for GCSE level, the student doesn't need to consider historiography and debate. The high level of detail was used very well to support the points that the student made which was excellent.

I query some of the essay's grammar and punctuation and I just found one typo. Whilst all this is nothing major and should not affect the grade the student gets (more so the mark in that grade bracket), it should be avoided as every mark counts towards the final grade obtained. The technical terms used very appropriate and were integrated well into the essay. The essay has been written to a high standard and the student follows the typical convention for the layout of the essay at GCSE level.