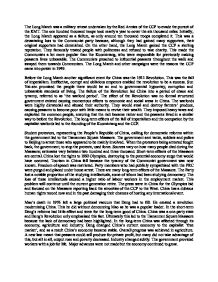 How Significant Was the Long March to the 1911 Chinese Revolution

The Long March was a military retreat undertaken by the Red Armies of the CCP to evade the pursuit of the KMT. The one hundred thousand troops took nearly a year to cover the six thousand miles. Initially, the Long March appeared as a failure, as only around ten thousand troops completed it. This was a devastating loss to the Communist party because, although they had gained many supporters, their original supporters had diminished. On the other hand, the Long March gained the CCP a sterling reputation. They famously treated people with politeness and refused to take charity. This made the Communists a lot more popular than the Kuomintang, who were responsible for previously making peasants lives unbearable. The Communists preached to influential peasants throughout the walk and swayed them towards Communism. The Long March and other campaigns were the reasons the CCP came into power in 1949. Before the Long March another significant event for China was the 1911 Revolution. This was the fall of imperialism. ...read more.

There are many long-term effects of the Massacre. The Party lost a notable proportion of the studying intellectuals, some of whom had been studying democracy. The loss of these intellectuals caused a higher ratio of labour workers in the employment market. This problem will continue until the current generation retire. The press were in China for the Olympics bid and focused on the Massacre reporting back the atrocities of the CCP to the West. China has a dubious human rights record now and in the past damaging their chances of hosting any international event. Mao's death in 1976 left a large political vacuum that Deng had to fill. He created a revolution modernising China. This he did without denouncing Mao as he was a popular leader. In the short-term Deng's reforms had little effect and were for the long-term good of China. China was a one-party state and Deng's Revolution only emphasised this fact. Ultimately this led to the Tiananmen Square Massacre because the lack of democracy had been highlighted. ...read more.

When evaluating the significance I must also bear in mind that if the 1911 Revolution had not occurred then the Long March would not have happened. I feel that Deng's Revolution was the second most significant event in China, in relation to the others I have studied. Deng enabled China to modernise and increase the standard of living for all through various outlets. It is very significant because of the great effect that it had on the people. This may still have occurred if the Communists were not in power and therefore makes it more significant than the Long March, and was not affected by the Tiananmen Square Massacre as it occurred before. The most significant event is therefore the 1911 Revolution. I feel that this is the most significant because of the great affect that it had on the country. The 1911 Revolution opened China up to different political options and left open a gateway towards a better way of life for all. Without the 1911 Revolution none of the other events would have occurred and the country may still be under imperial reign to this day. ...read more.