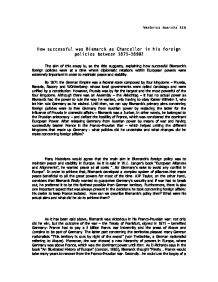 How successful was Bismarckas Chancellor in his foreign policies between 1871-1890?

Ver�nica Rosinha 5IB How successful was Bismarck as Chancellor in his foreign policies between 1871-1890? The aim of this essay is, as the title suggests, explaining how successful Bismarck's foreign policies were at a time where diplomatic relations within European powers were extremely important in order to maintain peace and stability. By 1871 the German Empire was a federal state composed by four kingdoms - Prussia, Bavaria, Saxony and W�rttenberg- whose local governments were called Landstags and were unified by a constitution. However, Prussia was by far the largest and the most powerful of the four kingdoms. Although there was an Assembly - the Reischtag - it had no actual power as Bismarck had the power to rule the way he wanted, only having to obey Kaiser Wilhelm I, who let him rule Germany as he wished. Until then, we can say Bismarck's primary aims concerning foreign policies were to free Germany from Austrian power by replacing the latter for the influence of Prussia in domestic affairs - Bismarck was a Junker, in other words, he belonged to the Prussian aristocracy - and deflect the hostility of France, which was considered the dominant European Power. After releasing Germany from Austrian power by means of war and having successfully beaten France in the Franco-Prussian War - which helped uniting the different kingdoms that made up Germany - what policies did he undertake and what changes did he make concerning foreign affairs? Many historians would agree that the main aim in Bismarck's foreign policy was to maintain peace and stability in Europe. As it is said in W.L. Langer's book "European Alliances and Alignments", he wanted peace at all costs "...for Germany's sake to avoid any conflict in Europe". In order to achieve that, Bismarck developed a complex system of alliances that made peace beneficial to all the great powers for most of the time. ...read more.

Behind its fa�ade, a series of factors kept alive Russian resentment at rising German power and at Austria pretensions in the Balkans". In other words, although the powers were allied, the climate of tension because of the Balkans region was inevitable specially after the Congress of Berlin, where Russia lost most of the rights she had achieved by the terms of the Treaty of San Stefano in favour of Austria-Hungary which was given the right to govern Bosnia-Herzegovina. What could be done then by Bismarck in order not to make Russia become more hostile? The answer came in October 1979 with Germany establishing a Dual Alliance with Austria-Hungary. It consisted of an agreement between the two powers where they committed themselves to aid each other in case one of them was attacked by Russia. However, they would remain neutral of attacked by a third power. What were Bismarck's motives for signing such alliance at a time when there was an anti-German feeling among Russia which could get worse? Certainly one of them was to avoid diplomatic isolation and to frighten Russia by the perspective of being isolated herself. Furthermore, a commitment with Austria-Hungary would please southern Germans disillusioned with the Kulturkampf as well as it would guarantee the safety of the Empire's southern borders. However, according to historian William Carr "the truth is that he acted once again on the spur of the moment to deal with an emergency situation - largely of his own making. The alliance was a temporary expedient to preserve the precarious balance of power in the Balkans by warning Russia off Austria. In no sense was Bismarck making a final choice between them" (quoted from W Carr "A History of Germany 1815-1985"). What is said in the excerpt is, in other words, that the Dual Alliance was a temporary solution Bismarck found in an attempt to solve the problem created by him - the growing hostility of Russia - in the Congress of Berlin, which could mean the beginning of a war he did not want. ...read more.

In relation to the resources, only South West Africa fulfilled the hopes of German people as diamonds were discovered there which constituted a very precious and valuable resource. However, the worst consequence of Bismarck's foreign policy was that it was a limited and bad experience concerning Imperialism and colonies, so in some way it led to German's famous 'world politic' years later which would play an important role in the events before the outbreak of war. In conclusion, Bismarck's foreign policy consisted mainly in the make-up of a complex system of alliances in a way he could achieve what he wanted and thought was the best to preserve Germany's interests: firstly, to keep France isolated; secondly, to avoid a war in Europe and thirdly, to guarantee the security of Germany. However, it was inevitable some day a clash between Russia and Austria-Hungary that would end up in war and that actually happened in 1914, what he managed to do while he was on power was to avoid it by delaying it for the most time possible. Along with that, another aim was to keep France isolated. Although he was able to achieve it for most of the time he was on power, in his final years Russia's turn to France could not be avoided due to the lack of investment by German businessmen in Russia. In fact, he was successful in his foreign policies while Chancellor of Germany as he achieved all he aimed for. The problem just began right after his downfall - no other person in the government was able to orchestrate things the way he did and was not able to maintain the alliances or at least find another solution in order to keep peace and stability in Europe - with the biggest mistake being done still in 1890 when Wilhelm II refused the renewal of the Reinsurance Treaty, which dictated Russia's definite turn to France and the start of Europe's split in two alliances that years later led to World War I. ...read more.