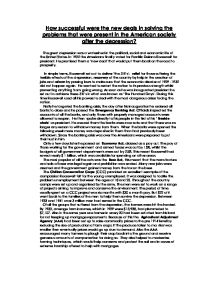 How successful were the new deals in solving the problems that were present in the American society after the depression?

How successful were the new deals in solving the problems that were present in the American society after the depression? The great depression was a watershed in the political, social and economic life of the United States. In 1932 the Americans finally voted for Franklin Delano Roosevelt for president. He promised them a 'new deal' that would put them back on the road to prosperity. In simple terms, Roosevelt set out to deliver 'the 3 R's': relief for those suffering the terrible effects of the depression; recovery of the country by help in the creation of jobs and reform by passing laws to make sure that the economic disaster of 1929-1932 did not happen again. He wanted to restart the nation to its previous strength whilst preventing anything from going wrong. As soon as he was inaugurated president he set out to achieve these 3 R's in what was known as 'The Hundred Days'. During this time Roosevelt used all his powers to deal with the most dangerous crises facing the nation. Firstly he targeted the banking crisis, the day after his inauguration he ordered all banks to close and he passed the Emergency Banking Act. Officials inspected the accounts of all the banks, and only those with properly managed accounts were allowed to reopen. He then spoke directly to his people in the first of his 'fireside chats' as president. ...read more.

By spending this money, the demand for goods from factories would increase, which then in turn would create more jobs. Amongst many employers in the United States, there was a strong determination to stop trade unions and their activities. The situation was so bad that, in some places, workers found talking together were fired. When employees joint together to bargain against their employers, the employers often used courts to stop them; this meant that workers struggled to improve their pay and conditions. Even throughout the years of prosperity when industrial profits rose by 72% those of the industrial workers only rose by 8%, so that by 1929, 5% of the population with the highest income received about a third of all personal income. The National Recovery Administration (NRA) led by Frances Perkins, the first woman in American history to hold a cabinet position, was set up to improve working conditions, hours, wage levels; production limits and trade union rights.. It was set up under the NIRA which passed laws which: abolished child labour, established a minimum wage of 40 cents an hour, gave workers the right to organise trade unions take part in collective bargaining. The National Labour Relations act also known as the Wagner act to whom all the credit goes to was set up to improve the law on trade unions set up by the NRA. ...read more.

By providing people with money and jobs he was able to put money into the economy, with money being spent on products, the demand in factories would increase, providing more jobs and more money. There were also agencies set up to provide relief to those he hadn't yet reach in the form of blankets, soup kitchens and other relief. He also set up schemes that would benefit for America in the long term whilst providing skilled workers with millions of jobs. He also considerably helped with farm labour, he set up agencies to help farmers pay for mortgages, buy their own land back, modernise their farming techniques and given them compensation for turning their crop into conservation land. This was a huge advantage for them because farmers were statistically the worst hit. There were acts covering the old, unemployed, sick and ill but there were few acts that helped against discrimination. Women although some were awarded high-figure positions were hardly helped by anything. They still faced discrimination whereby they were paid half that of men for wages, they were less likely as well to get the job because they were not considered fit for it. Black Americans still faced segregation in every way possible from transport to housing. Overall I believe that the new deals were a success and that they did help solve the problems caused by the depression. Many people believed at the time Roosevelt was taking money from the rich and spending it on nothing, whereas he was doing it for prosperity of the country. ?? ?? ?? ?? ...read more.